The all important Flatcap Derby (Atherton Collieries v Atherton LR) is nearly upon us, but before all of that, it’s a trip to Chadderton.  After a midweek draw away at Darwen, Colls were keen to maintain their promotion push at their bogey ground – Andrew Street. Colls hadn’t won away at Chadderton since September 1997… when I wasn’t even 2 years of age!

I hadn’t been to Andrew Street before, so with the sun shining, it was an ideal opportunity for me to tick it off my list. Colls most important member of backroom staff – Jasper – picked me up at Atherton Station at 12:35 on the dot (Other members of backroom staff are available). From there, we went to pick up club captain Brad Cooke, defender Rob Swanton… and one of the men named after the club itself, Karl Atherton.

Jasper and I had noticed that Brad has a habit of locking his door, chucking his kit in the boot of the car, before then running back to check he’s locked his door again. We were ready to wind him up about it today. Brad locked his door. Chucked his gear in the boot… and sat down in the front of the car. How disappointed were we! I then asked “Brad, have you locked your door mate?” looking slightly worried, he ran back to his front door. What a clown. 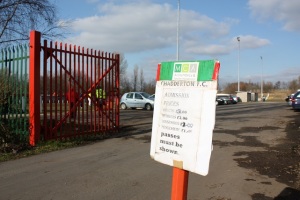 Chadderton is a suburb of Oldham, Greater Manchester. I had been to Chadderton once in my life… and that was last year when I was doing a Photography project on dilapidated industrial towns. The ground could have been included in that project. It really didn’t look up to much at all. Coming into view off the main road, you could already see the pitch through the broken/collapsing walls. Where is the equality in ground grading? Colls get shouted at for having a perimeter barrier which is half a foot nearer to the pitch than it should be. Chadderton? They appear to be able to do what on Earth they want.

Driving through the entrance to Andrew Street, we parked up on the right hand side of the large empty space found next to the pitch. Out we got, and we strolled on to the pitch to see what the pitch had in store for us. We found it hard to find a blade of grass. Paul Townshend summed it up, when he said “We are practically playing on compact mud!”. I apologise for starting my blog on a downer, but the afternoon didn’t appear to promise much.

A look around the ground, and it soon became clear that there was just the one seating area. An iconic terrace/seated section runs the length of the pitch. On closer inspection, it appeared that some vandals had ruined the innocent stand by scrawling some racist statements on the back wall. Oh well! It could have been worse… no wait. It couldn’t.

Found behind the goal on the far end of the ground was a grass embankment. Standing at the top of this mount offered a nice vantage point above the play, as the pitch sloped slowly away from you. Opposite this was the dated clubhouse, which has obviously seen better days.

I had been reading prior to my visit that they had secured funding a couple of years ago off The FA Cup, but nothing appears to have been done? – http://www.manchestereveningnews.co.uk/sport/football/football-news/chadderton-fc-score-with-lifeline-852486

Emil and his “crazy gang” soon arrived at the ground, with kit in hand. This was great news, as it meant Mitch Leece would be able to change out of his own clothes, which he had obviously bought from Primark. Mitch has been the unloved member of the team since joining from Eagley. He still hasn’t been kitted out with an Atherton Collieries tracksuit. I urge all of you to donate to the “Mitch Leece Kit Fund”. More details can be found in next weeks programme.

I went in search of the clubhouse. A similar layout to that found at Abbey Hey, with the room found above the changing rooms and players facilities. I eventually found the staircase, after walking through what felt like somebodies garage. When at the top of the staircase, I entered into a dark room, where Jeff Stelling was there to greet me on the wall. With no sign of anybody else in the establishment, I went back downstairs.

Chadderton had a cunning plan, where they only put one goalpost up until 10 minutes before kick off. This prevented the two teams from ruining the pitch. I’m sure Colls groundsmen Frank and Jasper will soon be introducing this little trick at Atherton Collieries!

The two teams walked out from underneath the clubhouse. Colls in their favourite kit of Emerald Green and White. Chadderton in their all red strip. The teams were led out by a smiley linesman, who later informed me he wants to appear on my blog. So this is Gibbo’s92, where dreams do come true… sometimes! A big shoutout to the linesman, who I am led to believe will be reffing the Colls v LR match this Monday! If you do make any strange decisions against our side, I will be deleting your photo (which can be found at the very bottom!) 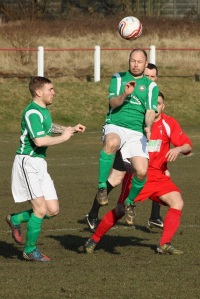 It took Colls around 10 minutes to get any kind of foot hold into the match. The bouncy pitch, and the continuation of “Ball-Gate” meant it was hard to actually play any kind of football. For those of you who are unaware of what Ball-Gate is, basically the footballs used by the NWCFL this season have been dreadful. Colls set of balls have been fine, but in other areas of the region, there has been uproar. Chadderton? All of their balls were egged.

Gaz Peet and Paul Atherton were both playing on the shoulder of the Chadderton defence, and kept getting caught offside. You felt that if they could stay onside just the once, Colls stood a pretty good chance of opening the scoring.

Colls found a breakthrough on 24 minutes. An attack from the away side was intercepted by Chadderton goalkeeper Niall Sultan. His clearance was very poor though, and went straight along the floor to the feet of Paul Atherton. Colls top goalscorer took once touch, before hitting the ball towards goal from near the halfway line. Sultan tried his best to track back, but the shot was inch perfect, and found its way into the back of the net.

Chadderton nearly equalised a few moments later when they broke down the left. A great cross followed, and the player who started off the attack in his own half, nearly headed the home side back level. It would have been a great team goal, and nobody would be complaining with the score at 1-1.

As it stood, the Colls went in with an all important lead at half time.

The last time I experienced non-league hospitality with Colls was away at Dinnington Town. When I was told I could come in again today, I was thrilled. You could also hear a sigh from the other Colls members, who knew that I would eat all of the free food on offer before they would even have chance to enter the building.

Upstairs we were taken into a separate room from the one previous, where a large plate of ham sandwiches waited for us. Complete with a large cup of tea each. I was happy enough. Looking out the window offered a nice view over the pitch, so we’d be able to tell when the teams were coming out. In true Wembley fashion, we went back down for the second half late.

The sun was still shining down in Oldham, and that’s when it hit me. I could go and sunbathe on the grass embankment found at the far end of the pitch. Off I went with my camera. I picked a spot just to the right of the goal, and lay down with my feet pointing towards play. I’d have taken a photo to show you my view… but I had left my smaller lens in the players changing room!

Colls had the same problem as in the first half when they found themselves in offside positions on too many occasions. I wasn’t online with one of the decisions, but judging by the reactions of the others, I certainly do think we should have been through on goal early in the second half. I was blissfully unaware of any contentious decisions, whilst I was sunbathing on my embankment.

A window above somebodies front door had been put through, and the ball had ended up in somebodies hall. Luckily it wasn’t me who had to go and knock on and say “Excuse me. Can we have our ball back please?” I went to take a photo of the damage, but the home owner didn’t look too pleased… so I kept my distance!

The next calamity happened just a few moments later when the egg shaped ball had been collected from the hallway. A corner came in from the left, and a whole host of players piled for the ball. One Chadderton player went straight into the goal post, and a loud “Dink” was echoed around the ground. The poor lad was lying on the floor, not moving, whilst the rest of the players argued on whether another corner should be awarded or not. I loved it.

The visitors soon put the game to bed, when Paul Atherton grabbed his second of the match. Brad Cooke swung a corner in from the right, and Atherton nodded the ball past Sultan to make it 2-0.

That was practically the end of the match, and it was a very good win for Colls. We didn’t play that well, but we ground out the result at our bogey ground, and it gives us a bit more confidence ahead of the Atherton derby on Monday night. The result also leaves us right in the middle of the promotion chase.

After the match we went back into the clubhouse for a quick drink before the journey home.

The smashed window was already being boarded up by the time we set off, and we made Jasper drive down a dead end just so we could see the damage at a closer angle.

It had been a nice, relaxing day out in the sunshine. Andrew Street isn’t one of the best grounds I’ve been to, but the club works within their means, and that’s all you can ask of from a non-league club. The most disappointing aspect of the day was that there was no matchday programme. It’s just unacceptable really.

I won’t be in a rush to make a return visit to Chadderton. I must just stress that I have no problem with the people who run the club. I think they do a cracking job, with limited numbers and no financial backing. I wish them all the best for the rest of the season.