Ground number 36, and another dreadful performance from Bolton Wanderers. On the plus side I ticked another stadium off my long list, had the privilege of meeting a group of obnoxious stewards, and I caught a glimpse of Father Christmas!

A brand new stadium awaited me and with Bolton putting on free coach travel to ALL supporters we took a strong contingent to the midlands. 2,600 to be exact, which equated to 37 coaches.

Callum, I and Danny Bolton* set off from The Reebok at 11:00 on the dot. Luckily we booked our travel relatively early and had been put on Coach 8, meaning that we had one of the decent coaches. It was great to see so many fans going to an away match. It was sods law that we would lose.

* Danny Bolton is not to be confused with my other away day friend Danny Bury. You may remember Danny Bury from previous blogs such as Swansea.

We arrived at The Hawthorns at around 13:45. However, it was a further 15 minutes before we got off the coach as we decided to go on a tour of West Bromwich, with nobody – including the driver – knowing where the convoy was heading. We were eventually chucked off the coach in the middle of nowhere, with nobody on hand to direct us to the ground.

After using my fantastic geographical knowledge we ended up on the main road, when suddenly we passed a big shop specialising in washing machines and other useful home appliances. Danny was drawn by a nice washing machine in the window, but we concluded that he would struggle sneaking it into the ground.

We plodded on up the road, with The Hawthorns gates in sight. Then suddenly, underneath a bus stop, two policemen tried telling us we “weren’t allowed this way.”

Being the rebels that we are, we ignored them and walked straight past. Why do ALL away fans get treated like crap? It really annoys me. All we wanted to do was go to the club shop for a bit of warmth and a mooch around.

We were taking our usual photos outside the ground when suddenly a man approached us and offered to take one of the three of us. We accepted, as he didn’t look like the type to run off with the camera. After the photo was taken the man started talking to us about “Scousers”… We’re in West Bromwich! Why was he so bothered about scousers? 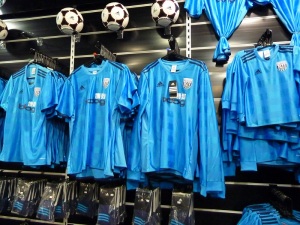 After having our usual photos outside the ground, and hearing some controversial opinions from the bloke mentioned, we decided to venture in the club shop. This turned out to be a rather boring, and uneventful experience. Even the people working in the club shop looked bored. However, there was a vibrant duty manager in there who enjoyed shouting things such as “Michael! Get those balls in that basket!” or “Michael! Line those shirts up in size order!”.

Walking around to the away end Danny bought some chips, and I guzzled one of my Tangos as I thought it would be a bit risky trying to sneak two bottles in. As it was, I managed to successfully sneak one in.

The away end concourse was very small, with a nice laminate flooring – ideal for spilling your beer and pie over.

I’m pleased that we were sat at the top of the stand, as the bottom tier didn’t offer a decent view. I was even more delighted when one of my Twitter friends Emily turned up and sat in front of me – How lucky was she? She had the privilege of listening to me moaning for 90 minutes.

The West Stand (formerly the Halford’s Lane Stand) was to our left. The stand houses the main TV cameras as well as the press and commentary area. There are plans for the West Stand to be demolished to make way for a single-tier, 10,000 seated stand within the next five years. The stand has instead been refurbished, resulting in a cut in capacity.

To our right was the East Stand. Built in 2001 to replace The Rainbow Stand it holds 8,791 fans and is the largest stand.

Directly in front stood the Birmingham Road End. Built in 1994 it holds over 8,000 home spectators. Between this stand and the East Stand lies the Woodman corner, named after the Woodman pub which stood just behind it until its demolition in 2004.

So after taking a few photos of of the stands, and other interesting things I returned to my seat. I was quite happily munching away on my sausage rolls… when suddenly one of my fluorescent friends marched up the stand with a menacing look. Now, I wasn’t doing anything wrong – but my past record with stewards made me fear the worst.

The fluorescent menace continued up the stairs, and approached me. However, because he was so fantastically obsessed with himself and his powers he took a different approach. He crouched down behind me. I ignored him. He then tapped me on the shoulder.

Mr. Fluorescent – “If I see your camera once more, I will confiscate it”

I nearly spat out my Tesco sausage rolls in disgust! I tried explaining to this plank that I was only taking photos for my blog. However, everytime I opened my mouth he interrupted me and told me he didnt care.

“Look, I’ve listened to you. Now let me finish. If there is that much of a problem with cameras in here, then why was it not confiscated when my bag was searched? And more to the point, why is he taking photos over there?”

The steward – I mean ‘Supervisor’ to give him his full title – turned around to look at this other hooligan with his camera. He then came to the conclusion his camera was fine. Why? What’s the difference you may be asking? Well…

I HAD A TELESCOPIC CAMERA WHICH ARE STRICTLY PROHIBITED WITHIN THE HAWTHORNS.

He may as well of just slapped the cuffs on me, what a naughty boy I had been! Oh, did I mention that his breath smelt of stale smoke?

Anyway, not one to moan… I carried on with my sausage rolls.

It was soon time for the teams to come out, and Bolton were sporting a teamsheet full of Championship quality superstars – as is so often the case these days. Players such as Chris Eagles and Nigel Reo-Coker were leading the line for Bolton in their battle against relegation!

With both West Brom and Bolton in desperate need for points after a poor run going into the fixture, it wasn’t surprising to see a lively start from both teams.

It was Bolton who had the early chances with Chris Eagles volleying over the bar and Gary Cahill heading towards goal before it was cleared off the line by Youssouf Mulumbu. At the other end Jonas Olsson and Shane Long both went close.

Jerome Thomas started the match very positively and the Bolton defence couldn’t deal with him. However, in all fairness… they can’t deal with anything these days. It was only a matter of time before the Baggies scored and the goal came when Zoltan Gera’s pass found Thomas who finished past Jaaskelainen in the Bolton net.

Thomas turned from hero to villain when he rather clumsily fouled Muamba in the West Brom penalty area. Klasnic stroked it past Ben Foster for his third goal in two games.

Bolton somehow managed to prevent West Brom from scoring again in the first half, meaning the teams went in level at the break.

Now, this is where I usually go for a walk. Maybe eat. Maybe even take photos… However, I was not in the mood for sausage rolls as they just reminded me of the supervisor.

The second half began and unsurprisingly it was the home side that started to apply the pressure, ultimately resulting in another goal.

The ever present Jerome Thomas played the ball out wide to the unmarked Nicky Shorey, who sent in a fantastic cross for Shane Long who finished expertly with his head.

In a half that was dominated by West Brom the Bolton players gave up, and so did my recollection of the remainder of the game. It was yet another downbeat and uninspiring display from a Bolton team who look like relegation material.

Although it’s quite a nice ground and was a decent day out, I won’t be in a hurry to visit West Brom again.