We were rock bottom of League One. Had started the season on -12 points. Came close to being put out of existence and had to rely on our youth players to see us through large parts of the season. Having lost heavily on the road a number of times, the last thing many fans would want to do is go to Burton Albion away on a Tuesday night. Having never visited The Pirelli Stadium and knowing we will not be in the same league next season, I was all over it.

This fixture was originally due to take place on Saturday 12th October but it was postponed due to the international break. That’s right. Burton Albion postponed a match because of international call ups. Liam Boyce was in the Northern Ireland squad and started in their match against the Czech Republic, which was fair enough. The other two meanwhile didn’t actually do much. I would go as far as saying that Burton were trying to pull a fast one. Nathan Broadhead was in the Wales U21 squad and scored a crucial goal in their massively important friendly in Moldova. Meanwhile, Burton’s second choice goalkeeper Kieran O’Hara had received the call from the Republic of Ireland and duly sat on their bench as they drew 0-0 in Georgia.

For me, the match should have just gone ahead. Especially when you consider the fact Burton could have easily put their U16 side out against Bolton in October and still have won with ease. As it was, their decision to postpone the match could be viewed as an unwise choice as the Wanderers, now with a stronger squad, held The Brewers to a 2-2 draw a few months later.

It was a very long day, heading straight from work down to Burton and back home at around 23:15. On my way from deepest darkest Salford, I had to make a quick pit stop at Old Trafford to pick up my mate Jamie who was on a teaching placement with the education team at the stadium. I used to work there myself, so it felt a bit odd nipping by but not actually going in myself.

We were both absolutely starving by the time we reached Burton, so we planned on finding something in the town. The ground itself is quite a way out from the centre, so we drove over there and had a wander down what turned out to be a pretty quiet high street. Other than the odd group of TikTok enthusiasts congregating outside McDonald’s and three blokes smoking on a street corner, there was nobody else knocking about.

Past the Burton shop on Burton high street we stumbled across the Lord Burton, the town’s Wetherspoons. Normally when I am visiting these different towns and cities, I will support the local economy and go for their beers and foods that are available. Despite it being brewed within shouting distance of the bar, there was not a chance that I was going to drink a pint of Carling. Not a chance at all. You couldn’t even pay me to do so.

It’s a shame that the beer which is produced in such a famous brewing town tastes like the contents of a school caretakers bucket. At one point there were over 30 breweries here as it became a centre for the brewing industry thanks to the quality of the local water, which “contains a high proportion of dissolved salts, predominantly caused by the gypsum in the surrounding hills.”

This allowed a greater proportion of hops to be included in the beer, thereby allowing the beer to be shipped further afield to foreign shores. Much of the open land within and around the town is protected from chemical treatment to help preserve this water quality; which is ironic as the first thing I can taste when I have had a Carling is chemicals.

These days, Burton produces around 15% of all the beer that is consumed in Britain. Labels such as Coors and Grolsch join Carling along with Marston’s who are also based in the town. Personally, I couldn’t hack consuming any of their products and instead had a pint of Pepsi instead. A handful of Burton fans were in the pub but not that many for a match day.

It was Bolton’s fourth away game in around a three week period so it was unsurprising that so few had gone to the trouble of attending this match. One supporters coach and just shy of 300 fans made the journey in total, scattering themselves along the away terrace while a few opted to sit in the Main Stand.

We made it to the Pirelli Stadium around half an hour before kick off, parking up behind an industrial unit on Derby Road, just a few minutes walk from the ground. The Pirelli was opened in 2005 replacing Eton Park, which had been the home of the football club since 1958, making this the club’s third ground following their formation in 1950.

By the time the Pirelli was opened 15 years ago, Burton were a non-league side playing in the Conference having risen up through the pyramid from the Birmingham & District League. Four years later and they were promoted into the Football League for the first time. In the meantime, they had put their name on the ‘football map’ when they managed to hold a Man United side that boasted the likes of Cristiano Ronaldo, Wayne Rooney and Ole Gunnar Solskjaer to a goalless draw at home in the FA Cup.

There were no such stars on show for this match, with former Sheffield United midfielder Stephen Quinn being about the only recognisable name on the teamsheet. He was presented with an award before kick-off, commemorating his 500th senior appearance in football.

Bolton’s side would probably struggle to reach 500 matches collectively. For those of you who follow me on Twitter, you may have seen me moaning at various points over the past few years because I haven’t actually seen Bolton win away from home since August 2012. That was thanks to a Marcos Alonso header away at Sheffield Wednesday, whatever happened to him? It’s fair to say that I really wasn’t holding out much hope for anything other than defeat here.

Despite being absolutely hammered for the opening 20 minutes, Bolton did stun everybody and take the lead from a corner. The ball was drifted in from the left and it picked out Ryan Delaney at the back post, who claimed his first goal for the Whites. His header seemed to take an absolute age to bobble through a sea of bodies and bounce in.

It was too good to last and Burton were on level terms just ten minutes later. Oliver Sarkic swung in a corner deep to the far post and Jamie Murphy was the one to get the decisive touch to make sure it went over the line.

Bolton surprised us further when on 38 minutes they regained the lead. Ali Crawford slipped the ball through for Manchester United loanee Ethan Hamilton to take the ball on and slip it past Ben Garratt.

With half time approaching we headed for a walk down to the bar area which was found near the turnstiles. Matt spent the interval debating whether to purchase “three faggots” from the food hatch and when he eventually buckled the shutters had been brought down. Personally, I’ve never had faggots and after being none the wiser as to what they were like after asking a local, we decided to go on Google for answers.

Many results popped up. Navigating our way through some slightly precarious items, we found our way on to the Tesco website where they are available to purchase at £1.80 for six. That means that one faggot is 30p which seriously begs the question, what on earth are these meat based items actually constructed from? I decided they could ‘get in the bin’ along with Carling.

All we wanted from the second half was to not receive a hammering. Between us this season we had seen us lose 5-0 at Gillingham, 5-1 at Lincoln, 6-1 at Rotherham and 7-1 at Accrington Stanley. We had been improving and this was arguably the best performance under the reign of Keith ‘I know my onions’ Hill.

The pivotal moment of the match arrived on 57 minutes when Bolton striker Joe Dodoo steered the ball wide of the post when in front of goal. It honestly was easier to score. Burton duly capitalised on the missed chance moments later. Patient build up play allowed Reece Hutchinson to deliver a beautifully targeted cross that allowed Murphy to get his second of the game.

Neither side would go on to grab a late winner and that was that. It turned out to be the last match of the season before football was suspended days later as the corona-virus pandemic unfolded. I have been informed by reputable health guru Joe Wicks that eating faggots and drinking Carling could bring immunity to the virus but it is not a chance that I am willing to take at this stage.

Overall, I was pleasantly surprised by the Pirelli Stadium. Essentially, it was a ground that is more National League than League One, which made it enjoyable. Only one stand had seating, allowing the rest of the crowd to stand in close proximity to the pitch giving it a bit more of an ‘old school’ feel to it than most modern grounds.

This close proximity did mean however that the linesman could hear every word that Matt and Pete shouted towards him. After not giving Bolton a clear corner, he had a wry smile on his face after hearing, “You don’t have a clue do you linesman. You need to get another job. You could go and be a painter or a decorator instead.” It was definitely a ‘had to be there’ moment but it just signaled how close we could get to the action. 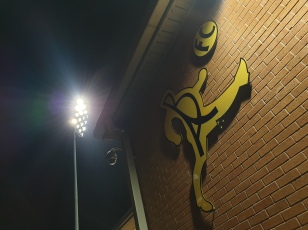 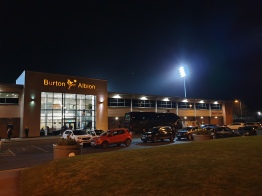 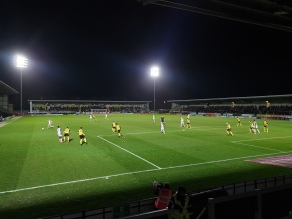 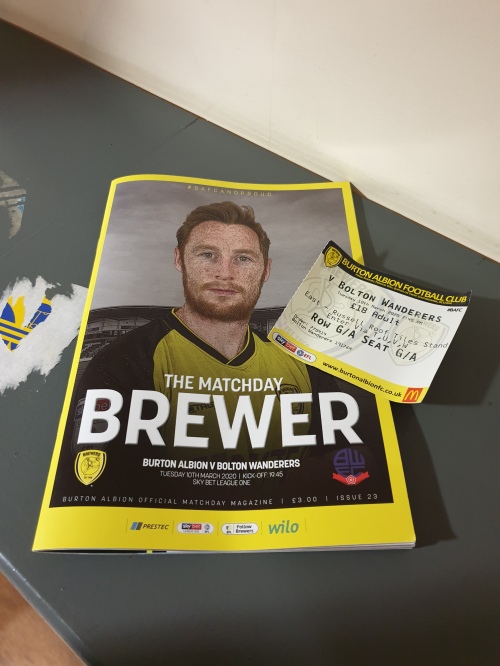