My second visit to The Emirates in a matter of months. Having been to Arsenal v Wigan in January, I was looking forward to another trip.

It was Carling Cup time and after agreeing that I could go to the match, whoever we drew I was really hoping it would be at a stadium that I hadn’t yet done. Cardiff, Aldershot, Southampton and Stoke were the teams I wanted to draw.

Not what I was hoping for, but it was another chance visit The Emirates, and at £30 for ticket and travel you couldn’t complain!

Setting off from The Reebok Stadium at 12:30 I shared the back seats with my mate Callum. Joining us were Albert and Fat Frank. For those of you who aren’t familiar with Fat Frank he is our most recognisable fan….

When I saw Frank walking down the centre of the coach towards us I won’t lie…I died inside. Our equivalent of Mr. Pompey was going to be sat next to me on a coach for 8 hours! How wrong could I have been. Frank and Albert looked after us and made our journey rather enjoyable.

After Frank set us some quiz questions such as; “Name all the teams who have been in The Premier league and then dropped down to League One” he then went on to give us half an hours worth of stand up which even Peter Kay would have been proud of. 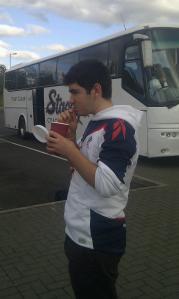 We arrived at Norton Canes Services (North of Walsall) just after 14:30 and spent around 30 minutes there before pressing on to London. I was following our progress on my HTC Desire! Technology these days…

Frank carried on with the on board entertainment and after managing to block the chemical toilet between us we arrived at The Emirates with around 2 hours until kick off. I was planning on visiting the newly opened Piebury Corner – Specialising in nothing but pies. However, Frank asked us if we fancied going to the pub with him.

We approached the pub and the doormen explained that we ALL needed ID to get in. “We’re Northern! We don’t do ID, now let us in we only want a drink.” somebody argued…we got in! Wow! I was in a pub on a matchday… this was a new experience for me!

We gave ‘somebody some money’ and they bought us a couple of ‘beverages’ at a pub which the name I am unsure of. (Don’t want anybody being prosecuted now do we!).

After a couple of drinks, a sing song with the Arsenal fans… and being spied upon by some bouncers we all exited the pub and made our way to the stadium.

After having a group photo outside, we approached the turnstiles where we were sniffed for drugs… by a dog, not a steward. With nothing to do before kick off my bladder decided to play games with me. I visited the same urinal 3 times in half an hour! I don’t know what they had put in these ‘beverages’ at the ‘unknown pub’, but it was certainly causing the toilets to be busy! 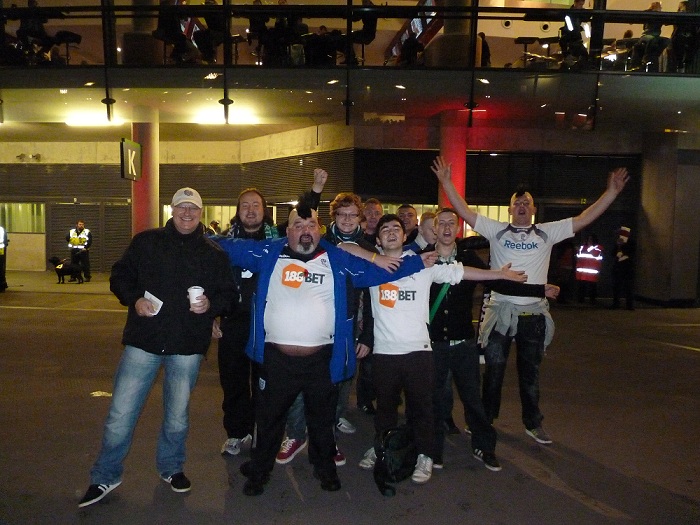 I met up with one of my mates Matty and we had a good catch up before the big moment arrived and interrupted procedures. The Gunnersauras Rex – Arsenals mascot – was posing for pictures, and not being one to miss an opportunity I had a photo with the green monstrosity.

People go on about how The Emirates is one of the best stadiums in the world. Well, I beg to differ. Yes, it’s impressive. Yes, it’s modern… but the negatives outweigh the positives.

have nothing against Arsenal fans, but they offer nothing in the way of an atmosphere. It’s a bit like Manchester City fans really. They will take a few years, and a bit of help from the club to help create a true singing section.

To my left was The Clock End. The famous clock was taken from Arsenals former home of Highbury.

Directly in front was the West Stand. This houses media facilities and dugouts.

To my right was The North Bank.

The stands obviously have no history and are all symmetrical to each other so I can’t really expand on them much further!

Bolton started the game quite well, and were passing it about with confidence which made a pleasant change. They even created a few chances! The first of which saw Lukasz Fabianski save well at his near post from a long range Darren Pratley shot.

It was then Arsenals turn to sting the hands of our very own ‘Cheesey Wotsit’ – Adam Bogdan. (He is ginger and wears a bright orange kit). Thomas Vermaelens’ thunderous free kick was going in until Bogdan got a strong hand to it and pushed it out for a corner.

Bolton deservedly broke the deadlock 2 minutes into the second half. When former Arsenal player Fabrice Muamba scored! I shall never forget the moment Bolton lead at The Emirates… You can probably guess I haven’t had many enjoyable away days.

We celebrated the goal as any fan would. Jumping up and down, hugging complete strangers! ♫ Wembley, Wembley! We’re the famous Bolton Wanderers and we’re going to Wembley! ♫ – I refused to sing this song as I am still in shock from the 5-0 thrashing we got last time we were there.

However, our joy was inevitably short lived. 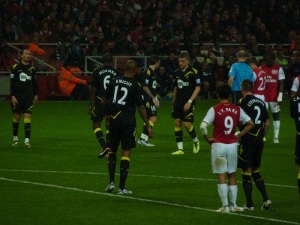 With Bolton not looking bothered after they had conceded we all knew what was coming. Summer signing Park Chu-Young was fed down the flank by Arshavin before then curling a beautiful shot past the helpless Bogdan in the Bolton net.

Bolton could have forced extra time late on when Chris Eagles’ shot was nearly fumbled in by Fabianski.

It wasn’t to be our evening and we were knocked out of the cup.

The journey back to Bolton was an eventful one. We arrived at Hilton Park Services at around 01:00, and were greeted by around 50 Manchester United fans who were travelling back from Aldershot.

They began to sing abusive songs towards us, and I actually thought it was going to kick off. Some of them even followed me to the toilets to shout abuse! One positive from our stop at the services was that we discovered there are at least 50 United fans from up North!*

I walked back to our coach to discover that another scumbag had made his way on to our coach and had began to look for a fight. Ironically, he was wearing a Ji-Sung Park shirt which meant he wouldn’t have been able to hit the target anyway.

We arrived back at The Reebok Stadium at around 02:30 – A whole 45 minutes behind the team coach!

It had been a very enjoyable evening out, despite losing.

*I know that there are more than 50 United fans that live in Manchester. Don’t start.