When I was on the coach back from Parkgate v Tadcaster it was mentioned that the next away game on a weekday was Heanor Town. Ben said we may well go depending on our respective timetables at college and university, but I didn’t think much more of it until a few days before the match. He texted me asking if I wanted to go on the coach and I needed to provide a response before the end of the day. As usual, I didn’t need much persuading and I was booked on another Taddy away day. This did not go down well at home where the Atherton Collieries players once again called me a variety of nasty names. Apparently I should have travelled down to Manchester to watch Irlam v Colls instead. I think even for somebody as sad as me that’s a step too far.

I had been home the weekend previous anyway when Collieries beat Daisy Hill 5-3 in a match that saw us attract 607 through the gates at Alder House. This was our biggest ever NWCFL crowd at Alder House and something which we naturally celebrated about into the late hours of the morning. It was during this time that I asked secretary Emil whether we had ever played Heanor Town to which he of course replied with a story about when he faced them once upon a time. We went there in 1997 for the FA Vase (I wasn’t even two years old) and we lost 3-0 in what was apparently a fiery encounter between the two sides. I doubt the match was as fiery as this one though with rash challenges flying in all over the place. Two players were stretchered off and one was hospitalised!

The same routine as Parkgate away was in store for me as I finished my lectures for the day. I dashed back to my brand new accommodation (I have moved yet again since the last blog) and grabbed my belongings before heading out again. Unfortunately I had no time to eat as I misjudged the pick up time so had to resort to stopping at M&S as most students do. I arrived at Acomb Green on time and ground hopper John McClure was waiting there for the coach. I had no idea that John was going to the match until half an hour before I arrived, so it was a pleasant surprise to finally meet the York City enthusiast. Talking of York City, I was soon joined by Ben and Haydn who also came with me to Parkgate.

The York Pullman coach fiasco which occurred on our last Tadcaster trip was almost topped on this journey. First of all the original coach had “a problem” so a replacement had to be sent from the depot, which meant it was already late. Then when the coach did eventually arrive at Acomb Green it decided to drive past us and go around the block. We arrived at Tadcaster’s ground slightly late and all 30 of us squeezed together making use of every seat available.

It was cold outside and warm inside. Basic science suggests that condensation may be an issue, but it didn’t matter to the coach driver who didn’t have a clue how to clear his windscreen. We were driving past Wakefield when things took a turn for the worse. One passenger was quoted as saying “it’s like an opening scene from Holby City this”. With that comment the driver pulled out a handkerchief and began frantically rubbing the window, keeping his other hand firmly on the wheel. Visibility was now at zero. Tadcaster chairman Matt had to step in and set about wiping the windscreen for the driver. I honestly thought I would never see York again and that my place of death would be Wakefield.

With the windscreen now clear, conversation soon turned to who the fans would like to see at a sportsmans dinner at Tadcaster. Various possibilities were bandied around. My personal favourites were Chris Kamara, Freddie Flintoff and George Best. The girl who suggested the club should invite George Best to Tadcaster took a couple of moments to realise that he had died quite some time ago, and that she in fact meant Paul Gascoigne. 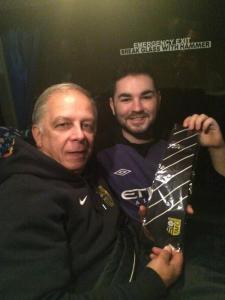 The fun didn’t stop there. It was time for the Tadcaster coach quiz! We were all partnered up with the person sat next to us, meaning I was placed with one of the usual Tadcaster fans. It didn’t count for much though as the quiz was purely general knowledge. I excelled in the science and mathematics questions, whilst my partner came out with biblical and generally older answers. As a pair we performed well but we never envisaged that we’d win. We scored half a point more than an opposing couple and became the proud owners of Tadcaster Albion club ties.

Still alive and with a brand new tie I made it to Heanor and I then looked on Google Maps to see exactly where in the country I was. I knew it was one of the longer trips a team has to make in the NCEL so I assumed I’d be in a part of the country which I am yet to explore and I was correct. Heanor is eight miles north-east of Derby and is the birth place of the Ladybird books. The iconic books were first created in a kitchen in Heanor by Douglas Keen.

The football club were founded in 1883 and play at the Town Ground which they share with the local cricket club. Heanor Town became founding members of the NCEL in 1982, before becoming founding members of the Central Midlands League four years later. In 2011 they transferred to the East Midlands County League, winning the league at their first attempt, gaining promotion back into the NCEL.

As you can expect from a ground that also houses a cricket pitch the facilities here are just three sided. A large shed stands behind the near goal, next to the changing rooms. There is also a large shed which runs down the length of the pitch opposite the cricket pitch. A modern and busy clubhouse nestled in the corner of the complex. I didn’t have a drink in there as I’m a poor student but everybody seemed to be drinking a lot, including the locals who were playing poker all night.

This was one of the more entertaining matches that I have watched so far this season with both teams going at each other from the first whistle. It was Heanor who had the first attempt of the match when Daniel Booth set up Kieran Debrouwer who fired just over the bar from the edge of the area. Tadcaster then went close twice up the other end but the scoreline remained goalless.

The home crowd were a vociferous lot who were on the officials backs throughout the match. The vast majority of them were congregated behind the home dugout making for a wall of abuse towards Tadcaster players and the referee. I’m all for getting behind your team but some of the stuff I heard shouted is rarely seen at non-league level. In fact, at one stage I was sworn at my a young ball boy who must have been about ten years old. I told him that I wished my mother still dressed me, before strutting off to the other side of the ground before things kicked off. 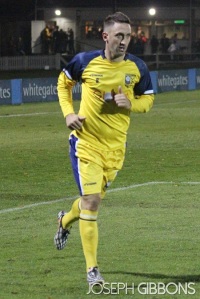 Heanor Town fans were angered with the referee’s decision not to take further action against former Hartelpool United defender Denny Ingram when he brought down Gary Ricketts from behind. The referee played a clear advantage which Heanor squandered. Matthew Sparkes then put in a strong challenge on Wells who was eventually stretchered off the pitch after a lengthy stoppage.

After Wells had left the field of play the home side took the lead almost immediately. Gary Ricketts crossed in from the right and Kieran Debrouwer was on hand to head the ball past Albion goalkeeper Tom Morgan.

Tadcaster were back on level terms on 32 minutes when poor Heanor defending allowed Callum Ward to get a shot away. The ball had bounced around with neither side able to claim control of it but Ward chested the ball before volleying it into the bottom right hand corner; in off the post. Heanor goalkeeper Ian Deakin could do nothing about it. I felt sorry for Deakin who had been having a good laugh with us during the stoppages.

On the stroke of half time a ball over the top of the Tadcaster defence was competed for by Heanor forward Gary Ricketts. An advancing Tom Morgan also came for the ball and the two collided in mid-air. Morgan came off the worse and hit the deck with some force. Another lengthy stoppage was the result, with Morgan being stretchered off and taken to hospital with a broken nose and concussion.

At half time we headed into the clubhouse where the poker night was still in full flow. I’ve been in establishments where darts and dominoes had been at the centre of attention, but they appear to do things differently in Derbyshire. I could be wrong, they could have just been posh tables. We watched Sky Sports News to pass the time whilst digesting what had been a controversial and feisty first half. Not as controversial as the Serbia v Albania match that we were watching on TV which was abandoned after a drone dropped an Albanian flag on to the pitch causing a mass brawl.

We nipped to the local corner shop to see if they were selling drones but we weren’t able to replicate such a stunt with a Tadcaster flag in the second half. Probably for the best as we were beginning to find the home fans slightly intimidating. It could have been worse though as I did want to fly a Lancashire flag on a drone which would have seen me being chased by both sets of fans…

Anyway, enough of drones and back to the match which was evenly poised. Heanor found it hard to break down a well organised and resilient Albion defence. The visitors took the lead on 60 minutes when Carl Stewart glanced a header into the left hand corner from a wide free kick. Deakin got a hand to the ball but was unable to prevent it from hitting the back of the net.

Tadcaster should have extended their lead when Deakin slipped whilst taking a goal kick. The ball fell to substitute David Brown who opted to carry the ball closer to goal rather than hitting it first time. This allowed the Heanor defenders to get back and put in a last ditch challenge before Brown pulled the trigger. The match finished 2-1 meaning that Tadcaster extended their lead at the top of the table to three points following Shaw Lane Aquaforce’s 2-2 draw at home to Handsworth Parramore.

We left the ground and waited on the street corner for the Pullman coach to pick us up. It has turned into a cold evening, so there was a large sigh of relief when we were finally allowed back on the condensation filled box. The journey back to York seemed to take forever, and I did wonder why on earth I had agreed to go along to Heanor. The answer was simple; it was another ground ticked off and another Tadcaster match. The people at Taddy have really looked after us over the last couple of matches and again, I can not wait for the next away match that I can make. Arriving back at Acomb Green, it was nice of John to offer me a lift back to my flat which stopped me having to walk an hour back on my own. Cheers for that John!

Overall, another decent night on the road. It was certainly something different. 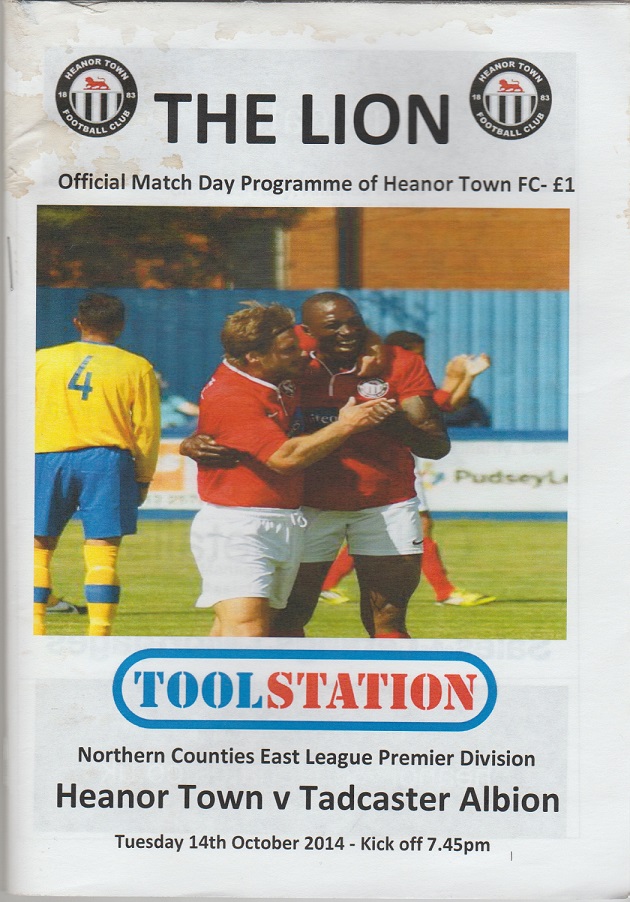