Day three of my trip to the Valleys and it was time to sample Matt’s local football team. It was also time for him to visit his local team for the first time, as he maintains the only time he’d visited the Athletic Ground was to binge drink as an underage teenager. Whether he had bleach blonde hair at the time is yet to be ascertained.

Treharris is a small town in the Taff Bargoed Valley which was formed around Haris’s Deep Navigation Colliery which was opened in 1872. The colliery and resulting village were named after F.W. Harris and his Navigation Steam Colliery.

The morning started with me in a slightly rough state – once again – following our gallivanting in the Glan Taff Inn the night before. Matt and I had returned from our match in Abergavenny before drinking into the early hours of the morning with barmaid Sophie. I tried to convince her to come to Treharris for the day, but it was never going to happen.

Despite the promise of a pint in both The Navigation and The Colliers Cwtch, Matt and I spent the day in Treharris alone. Regular readers of our blogs will know by now that we are more cultured than simply visiting different towns, drinking and watching football as an after thought. We of course were surrounded by some beautiful scenery so started the day by travelling up the Twynagaregg Hill from where you could see Matt’s house across the valley.

Thankfully, we didn’t have to walk up the steep hill which rises from just behind the Athletic Ground as Bob was driving. Having admired the view for a good view minutes, attention soon turned to where we would start drinking, and the options weren’t that wide ranging as previously stated.

The Navi was our first port of call, where I couldn’t get into the groove of things and opted to drink Tango for an hour while Matt experimented with Carling Premier, which is basically a nicer branded Carling which doesn’t really taste of anything. As we sat next to a fruit machine that stated only members were allowed to play on it, we noticed it wasn’t just our drinking habits that were different this afternoon. Matt sat facing the front of the pub where the Celtic match was being shown, as I sat facing the opposite way watching the Challenge Cup semi-final.

With a number of Cardiff City shirts on the wall the place seemed like a real locals pub. I could have spoken to the locals about former Colls player Anthony Pilkington but I wasn’t really in the mood to have my head kicked in by a group of youths who had congregated next to us having just visited the local chippy.

Further up the road was the Colliers’ Cwtch which apparently used to be called the Dog and Rabbit. It had obviously been renovated when the name change occurred too, as the pub was quite nice and comfortable inside. There was nobody else in at this early stage of the day, and with only Matt buying a pint it wasn’t the liveliest place we’ve ever visited. 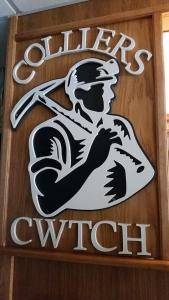 By the end of our time in the Cwtch, I had decided that it was the best named pub I had ever visited. I am fed up with generically named pubs that make no sense, or hand no reference to the local area. When I am prime minister all pubs will have to reapply for a license, and included in this will be an area where in no fewer than 500 words the landlord will have to explain why their pub is named as it is. Now, for instance, my local pub is the Rope & Anchor, and as much as I love the place, I feel it would be far better named ‘The Valley’ or ‘The Seven Armed Octopus’.

As I strolled further up the slight hill with Matt, I continued to wonder about pub names while he showed me different locations related to his childhood and upbringing. Commercial Terrace soon came into sight and we turned left towards where the Athletic Ground is situated. There is no clear entrance to this venue that is very much tucked away from view.

The changing rooms are found off the small car park, next to the small entrance into the ground. Within a metre of entering through the gates, you find yourself in the only stand at the Athletic Ground. To put it simply, this ground probably wouldn’t be allowed to stage matches in England due to strict and pathetic ground grading regulations.

It really is a nightmare from a health and safety perspective, but that is what makes the ground popular amongst groundhoppers. A balcony leads into a small refreshments area which doubles up as a laundry and equipment room, backing on to the home changing room. Fans can still stand on the balcony, despite notices up telling them not to, but this probably isn’t allowed for a league match.

Treharris have played at their home since 1900 and went on to attract crowds of around 2,000 when they won the Western League in 1910. It seemed absolutely ridiculous that 2,000 people could watch a match at this ground considering how small it is. In fact, it is considered that small that if Treharris were ever to be relegated from the Welsh League they would not be allowed to be promoted again using their current facilities.

The football club was originally founded in 1889 and is considered the oldest club in South Wales with the club also being founder members of the Welsh League in 1902. Treharris were known as one of the best teams in South Wales and produced Welsh international footballers for a time at the start of the 20th century.

They were also one of the first clubs in Wales to play games over the border in England, as they generally dominated the early South Wales footballing scene. Sadly, the closing of the mines hit the club massively with the final closure in the early 90s having a monumental impact on the area’s economy, let alone the football club’s setup.

Opposition for Treharris came in the shape of Tata Steel, who had made the journey up from Port Talbot. They were originally due to take on Undy Athletic, but this match was cancelled on Thursday meaning we were close to not even visiting the Athletic Ground. Fortunately, the club’s Twitter account was kind enough to inform us that a replacement fixture had been found. What they didn’t tell us was that this would be Tata Steel’s reserve side meaning there was only ever going to be one winner. 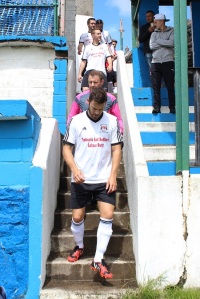 The two sides walked slowly down the steep steps that lead down on to the pitch. The final step is such a drop that many of the players opted to jump down on the field of play. Treharris were in their white and black home kit, with retro numbering on the back which won Matt over immediately while Tata were in claret and blue.

It took no time at all for Treharris to take the lead, as Christopher Owen scored early to put the home team 1-0 up. Moments later it was 2-0 when Matthew Sellick leaped brilliantly to head in a great cross, before minutes later Owen added his second and Treharris’ 3rd with a lovely dinked finish.

Treharris added further goals through David Mitchell and Owen completed a very quick hat-trick. He then came within inches of scoring from the halfway line when he lobbed the goalkeeper but saw his effort rebound off the left hand post. Keiron Cook added another goal to make it 7-0 and that was half time.

Admittedly, I thought it was only 6-0 at the interval so clarified this with the referee when we stood on the balcony having a sociable brew at half time. It also seemed like he had allowed play to go on forever in the first half, but was adamant his stopwatch was correct. It did seem a bit surreal speaking the official at half time, but I suppose it was better for him being outside with the spectators than in the changing room on his own. Would it have been wrong to have had a half time shower, or would that be acting a bit big time?

It started to rain as the second half kicked off and it also continued to rain goals. Nathan Powell drove a shot goalwards past the out of position keeper to make it 8-0.

The ninth goal came from the penalty spot as David Mitchell scored his third of the day, after Matthew Sellick was shoved in the box. The score remained liked this for a while until Owen grabbed his fourth of game to make it 10-0. The personal goal tally competition continued between him and David Mitchell, as he also grabbed his fourth shortly after to make it 11-0.

One more goal followed, and it could have been a lot more. 12-0 it finished. I felt a bit sorry for a young looking Tata Steel side as their soaked and miserable faces departed the field of play without even a word of comfort from their management team.

We left the ground as soon as the final whistle sounded, following the players back up the steps towards the exit. I had around an hour before I had to catch my train back to Manchester. Where did Matt decide to take me? Some stingy little Labour Club. I never trust a place that has a stairlift as it’s main feature when you walk inside. Things got worse when I saw that the main drink they had was Coors and they had the women’s FA Cup Final on the TV.

Bob was soon on hand to pick us up and drop me off at Quakers Yard train station where I caught my train to Cardiff. The weather was quite pleasant as I rolled into the capital city and with an hour to spare I found myself back on the beer at the Prince of Wales Wetherspoons. You guessed it, another can of Sweet Action was supped before I went for a bit of a wander around the city centre.

Adverts for Cardiff City season tickets were plastered everywhere, and who was at the centre of them all? Former Atherton Collieries striker Anthony Pilkington. A strong message for any of our current team that if you work hard and never give up, you may one day see your face on a phonebox outside a row of pound shops.

Unfortunately I couldn’t spend the evening in Cardiff as it did look quite fun. I was soon on my way back up north to Manchester and got back home at around 22:00. It had been a fantastic three day stay in the Valleys and I sincerely hope I’ll be able to do it again sometime. A big thanks to the Harrison family for having me and ferrying us around!

My football weekend finished in fantastic style by me making my debut on the Alder House pitch at Atherton Collieries. It was the second annual Bolton Wanderers fans v Manchester United fans, organised by the Rope & Anchor. I enjoyed a 25 minute stint on the left wing (the only position I had never played in my life) and was later nicknamed “twinkle toes” by a couple of Collieries committee members. I even gained a big whopping bruise on my head for my efforts after a bloke twice my size and height came steaming in behind me for a header. Ironically, he came off the worst and had to be substituted. We won 6-1 to retain our trophy.