My trip to Leek CSOB was the perfect hangover cure after a night out; it was quiet albeit nerve-racking as a Colls fan . CSOB really was on it’s last legs when I visited, but a new lease of life has now been found due to a move away from Harrison Park. For the start of the 2014/15 season the club will compete in the Staffordshire County Senior League at their new home of Pointon Park in Cheddleton. This came after they resigned from the NWCFL.

I had never seen Leek CSOB play. Each time they faced Colls I found myself working or dragged to another match, so when I saw I had a free weekend I made sure that I ticked another ground off my list. Whilst I’m not a fan of ground shares, it was great to see Colls play at a ground bigger than what we are used to in this division. 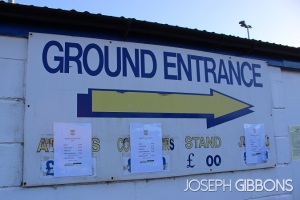 So good are the facilities at Harrison Park, when FC United started life in the NWCFL, their first ever competitive away match came against Leek CSOB. 2,600 spectators came to watch CSOB that day… not quite as many turned up for this fixture against league leaders Atherton Collieries.

Leek CSOB (County School Old Boys) were founded in 1945 and became founding members of the Staffordshire Senior League in 1984. Twelve years later, they gained promotion into the NWCFL and had remained there until their resignation towards the end of the 2013/14 season.

Colls vice-chairman Bod was the driver for this trip. There was a two car convoy for the Colls Crazy Gang, bringing the streets of Congleton to a stand still as we passed by. We arrived in Leek really early, but with the ground being outside the town centre I didn’t get to see much. In fact, the furthest I walked on this trip was from the car, to the White Lion pub next door, into the ground and back to the car.

It was evident that I was struggling with a hangover, and this is when I was told of the “hair of dog” phenomenon. Somehow, I had never heard of this in my life. Basically, to get rid of your hangover, have another pint. I didn’t believe this would do any good whatsoever and refused the offer of a corona numerous times. The pub which we were in was a little bit posh anyway, so it would have been an expensive round. 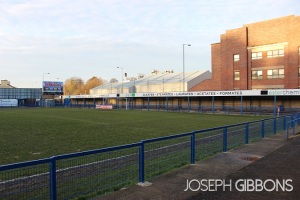 With half an hour or so until kick off I decided to stroll over the car park into the ground. The turnstiles were being manned by a group of young lads who must have still only been at primary school. They seemed a bit confused by my league pass, but I bought a programme from them which seemed to go down well. I did feel totally ripped off having to pay for the programme, but as Emil at Colls says to me, “Any programme is better than no programme”, and I appreciate the efforts of the club in at least producing one.

There was only one Leek fan at the match, meaning the remainder of the crowd consisted of us lot from Colls and a couple of Leek volunteers. The attendance must have only just reached double figures; slightly bolstered by players who were sitting the match out through injuries and suspensions.

Atherton had a depleted squad, but still left with all three points after a frustrating afternoon in Staffordshire. Aaron Cringle served a game of his suspension after his red card at Chadderton, Daryl Patton remained on the sidelines with a groin injury sustained in the warm up at Chorley, David Hill was still injured and Gareth Peet had moved to Skelmersdale United. In front of a sparse crowd, football rarely threatened to break out as a tricky playing surface caused havoc all afternoon.

The afternoon started brightly for Colls, who were allowed far too much time on the ball as Leek sat back and invited pressure. The blanket defence which the Harrison Park side had assembled proved hard to break down, but when it was breached, Colls didn’t take their chances.

Jake Patton came close to opening the scoring on 3 minutes when he placed the ball just wide of the post after a great cross from Karl Atherton. The home side then went up the other end, with the winger winding in and out of the Colls defenders before drilling just wide of the left hand post. It was a let off for Colls, who had been in control so far.

No Collieries fixture would be complete without it’s fair share of penalties, and this match was no exception. The home side claimed the first spot kick of the afternoon after a mix up in defending. Communication broke down and goalkeeper Joe Brobbin brought down the Leek striker in the area. Up stepped Dwayne Spence who rolled the ball wide.

Colls then regained momentum, but couldn’t find a way past the Leek goalkeeper. On 36 minutes Mitch Leece scored his fifth goal in as many matches after returning to Alder House. Charlie Stoker set off on one of his usual runs from near the half way line. The Skelmersdale youngster rounded the defenders before squaring the ball across the face of goal. Goalkeeper Lewis Rhodes looked to have the situation under control, but fumbled the ball and Leece was on hand to stab the ball into the back of the net. 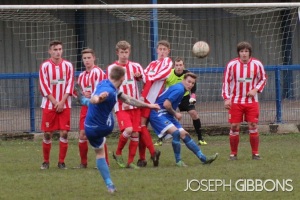 As the first half went into time added on, the league leaders would have been satisfied with their one goal advantage. However, the home side were gifted an equaliser with the last chance of the half when a free kick was curled in. Brobbin dropped the ball to the feet of  Oliver Mellor who slammed the ball into the roof of the net to send the sides in level.

We as fans were fuming at the cock up which had unfolded in front of us. Not to worry though, it was time for half time hospitality – my favourite part of the day. I enjoyed a lovely cup of tea whilst watching the Rugby League World Cup on a small portable television which was shoved in a corner in the wooden hospitality lounge. There was Leek Town memorabilia everywhere, reminding us just which side was the bigger one in the town.

A pretty uninspiring first half persuaded me to stay in for a further brew before heading out for the second half. Surprisingly when I re-emerged I hadn’t missed much. I chose to sit with the Colls players who were in the stand for the remainder of the match. What an experience that was. They giggled all the way through whilst heckling their own team mates.

The home side tired substantially in the second half as the game became stretched. Mitch Leece should have grabbed his second when he picked the ball up on the halfway line before charging into the area. With only the goalkeeper to beat he pulled the ball well wide of the right hand post.

Both Chris Lawton and Kieran Halliwell were enforcing themselves as major threats from set pieces. Each corner kick that was delivered into the Leek area caused problems, with Halliwell having two headers cleared off the line.

On 60 minutes, Stoker hit the bar with a delicate volley before a change of formation and tactics was introduced by the management team. Karl Atherton made way for his twin Paul and Mitch Leece was replaced by Mark Truffas. Jake Patton was told to go up front and the impact was almost immediate.

Charlie Stoker picked the ball up on the left and rounded the Leek defender too easily. Stoker cut inside and was hacked down in the area, leaving the referee with no alternative but to award another penalty at the same end. Kieran Halliwell – who was boasting before the match about how he doesn’t miss penalties – stepped up and passed the ball to the right of the goal where Rhodes was able to pull off a fantastic double save to keep the score level. 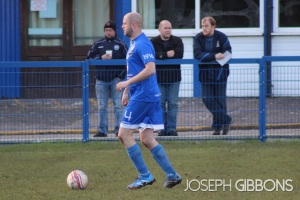 On 85 minutes, Jake Patton scored from close range after a scramble within the area. It was evident from the celebrations that it meant a lot to a team who had  maintained discipline and composure all afternoon.

Now into stoppage time, Leek broke on the counter attack and can count themselves unlucky not to have equalised. Cutting in from the wide right, the winger whipped the ball across the face of goal where it went less than an inch past the post.

On 93 minutes Collieries could eventually relax and enjoy the rest of the afternoon as they scored a third. Josh Peet found himself with plenty of room on the left before crossing the ball into an unmarked Paul Atherton. The striker simply had to pass the ball past Rhodes to secure the three points.

We could eventually relax and laugh at the match that had unfolded. Football rarely threatened to take place, and only one side appeared to try. The pitch was horrendous; possibly the worst I’ve ever seen. It was claggy, bobbly and full of sand. Leek had a game plan and stuck to it well. Kieran “I never miss a penalty” Halliwell had a brand new nickname which stuck for the rest of the season, and Colls had another three points which kept them at the top of the table… but only just!