As is so often the case these days, my trip to Bamber Bridge was another unexpected and rather unplanned adventure. I do miss the feeling of anticipation and excitement in the days leading up to a groundhop at the moment, but I do also love delving into the unknown; not having a clue what will happen.

My A2 (second year of college) timetable had been given to me the week previously. Although it was a stinker and I had a long year ahead of me, I did have a solitary early finish (on a Tuesday) and a single late start (on a Wednesday). This means only one thing. I can go to a match on a Tuesday evening… homework permitting of course.

So, there I was in college (Yes, they do have colleges in Wigan) a bit bored and in desperate need of an evening out. A bit of excitement and a break from the constant work was more than welcome. I wasn’t yet old enough to go into Manchester, and I still couldn’t drive (I still can’t). With this in mind I’m still reliant on Aaron and Joe to be my entertainment committee.

Joe was too busy mystery shopping in Yorkshire – sounds fun –so it was Aaron who had to entertain me for the evening. Thankfully he was free, and was willing to drive pretty much anywhere. A trip to Scarborough Athletic was quickly discounted as we trawled through the fixtures to find a match. We whittled it down to a final four: Witton Albion v Skelmersdale United, Northwich Victoria v Kendal, Burscough v Farsley and Bamber Bridge v Warrington Town.

As you can tell (or you wouldn’t be reading this), we chose Bamber Bridge. A brand new ground for me. Aaron had been there before and spoke positively about the place, so we had nothing to lose. Also joining us would be Warrington Town fan, Rob Clarke.

Over the past few months, Aaron had been picking me up from my house quite regularly. It’s safe to say that he was always at least half an hour late on each occasion. With this in mind, I didn’t even bother asking for his estimated time of arrival. I simply got ready, sat in the living room and waited for the sound of a Citroen C2 (with awful music) rushing down the street.

We set off from Atherton at around 18:30, giving us plenty of time to drive up to Bamber Bridge. Where is Bamber Bridge I hear you asking? Well… errrrmmm… it’s near Preston, up past Chorley. That’s what we knew, roughly. Our sheer stubbornness of refusing to use a GPS on our adventures was going to get us lost at some stage. Safe to say, we nearly didn’t make kick off.

Heading up towards Preston, we basically guessed at which motorway junction to leave at. A few minutes later and we were driving past Deepdale. Still refusing to use a GPS, we went back on ourselves and headed back down the motorway. Another wrong turning later and we were on our way to Blackburn. Aaron then took it upon himself to follow my directions, which ultimately led to us going down a road which looked for a few seconds like it was for oncoming traffic.

We still couldn’t find any signposts to Bamber Bridge. I was frantically searching Twitter to see whether Bamber Bridge had vanished into a black hole overnight and I had somehow missed the small matter on the local news. Then, by sheer luck rather than judgement, we found a signpost. 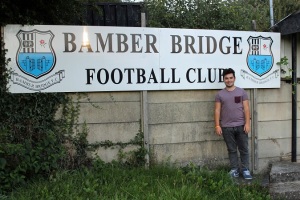 Fortunately the place wasn’t too busy, and we rolled up in the car park around half an hour before kick off. That is when I discovered that the club don’t provide concessionary prices for students. If there is one thing I hate about some football clubs, it is those who don’t offer concessionary prices for skint students. Who do they think they are? I was being deadly serious when I told Aaron to start the engine up and rush over to Burscough v Farsley. It may have been a less appetising fixture, but at least they don’t rip off fans.

I approached the turnstiles, and for some reason said “How much is it for a student?” to which I was quoted a concessionary price. I had been moaning for the last five minutes about ticket prices, only to find out that I had been given false information from the club’s Twitter account. I never did apologise to Aaron for my incessant moaning. Oh well!

Once through the turnstile, the ground presents itself to you. The thing that struck me first was the amount of netting which was hanging around the ground to prevent balls from flying out into the neighbouring gardens and motorway. I’m sure a group of fisherman in Fleetwood woke up one Thursday morning wondering where on Earth their fishing nets had disappeared to! 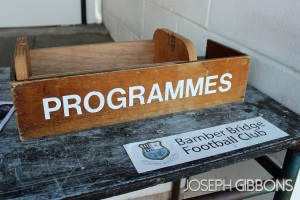 Matchday programmes were available from a table behind the turnstiles – priced at £1.50. It was a nice little publication at a standard price for the division.

The ground was opened in 1987, and named Irongate after the area in which it is located. These days the ground is called the QED Stadium for sponsorship purposes. The most notable match to take place at Irongate was in 1996, when the Czech Republic national team arrived in town for a warm up match ahead of the European Championships. A crowd of 2,300 piled into Irongate and witnessed a 9-1 victory for the Czech’s.

The newest part of the ground is the Jez Baldwin Stand which houses 500 seated spectators. The stand was constructed with money from the Football League Trust and income gained from the club’s FA Cup run in the 1999/2000 season. The changing rooms and other player facilities are found underneath the seating.

A lap around the ground won me over. I loved the small shed which runs along the far end and bends around the corner flag. This is where Warrington manager Shaun Reid spent much of the first half barking orders to his defenders from the pitch black surroundings of the shed. You could hear Shaun, but you couldn’t see him.

The first chance of the game fell to Warrington’s Scott Metcalfe who was unlucky not to open the scoring. Metcalfe – a summer signing from Curzon Ashton – raced on to David Mannix’s lofted through ball, where Brig goalkeeper Lee Dovey rushed out to the oncoming attacker. Metcalfe lobbed the ball over Dovey but his shot bounced just wide of the right hand post.

It was the home side who were unlucky not to be in front moments later after a defensive mishap from Warrington. A cross came in from the right and goalkeeper Josh Cook failed to deal with it. Matty Kay fired the ball back towards goal with a low shot but Crook kept the ball out with his legs.

On the half hour mark Josh Cook was tested again. This time he dove well to his right to deny Daniel Wilkins a goal after a firm header.

Warrington came straight out of the blocks at half time, and within three minutes of the restart, Ben Wharton found the net. Chris Gahgan received the ball in the middle of the field before he threaded the ball through to Phil Davies. Davies passed the ball forward to Wharton, who in turn flicked on for Ciaran Kilheeney to chase down the right. Kilheeney crossed the ball low, where Wharton finished well to give The Wire a 1-0 lead.

Town doubled their lead on 52 minutes. Kilheeney, this time registering himself a goal. A corner came in from the left and was only partially cleared by the Brig defence. Peter Dogan fired the ball back into the area from the edge  of the box. The ball found its way to Wharton who set up Kilheeney for another good finish.

Brig then came into the game and nearly pulled a goal back through a goalmouth scramble, but the Warrington defence remained as firm as ever.

The visitors were now well on top, and were beginning to play with confidence and flair. Gahgan added a third when he found the ball at his feet at the edge of the area. He took one touch to tee himself up before drilling a shot along the floor and into the bottom right hand corner. The Warrington fans congregated behind the goal were now in a buoyant mood as they broke out into a collective chorus.

I’ll be in no rush to return to Bamber Bridge even though it’s a nice little ground. I’ve heard the clubhouse is quite welcoming but I didn’t get chance to go in there. I particularly liked standing at the far end of the ground away from everybody else, a moment which was ruined when the overly-raucous Warrington fans decided to invade.