I was excited. It was time for my first ever World Cup Qualifier. With the 2014 Brazil World Cup just over a year away, it was time to sort out which countries would be competing in South America. College had taken the back seat and I was off to Swansea to see Wales take on Croatia – a nation ranked fourth in the FIFA world rankings.

I had tried to get to the Wales v Austria friendly a month earlier, but I had other commitments. So when I saw the Croatia fixture I made sure I could attend that one.

Staying in Swansea for a few days, getting to The Liberty was always going to be easy, so that was one worry off my mind. Next? How do I get a ticket? Then I realised it was Wales, and that they don’t really seem to care about their national side.

Lost Boyo himself Matt was also making the trip down from North West England. He’d been travelling up and down the country in the week leading up to the match and he wasn’t going to miss his national team playing at his clubs ground.

I caught the train from Llansamlet station and caught a one carriage wonder into the city centre. Also on our train was Pancho from Dirty Sanchez and Balls of Steel. To say he’s small is an understatement. He nearly fell down the gap between the train and the platform edge.

The Croatians had already taken over Swansea city centre. Castle Gardens was slowly being invaded, while others resorted to queue jumping in McDonald’s. Remind me when I go to Croatia to leave all of my manners at Manchester Airport? 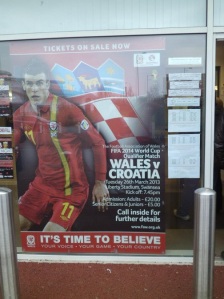 It was still mid afternoon and we couldn’t be bothered walking up to The Liberty so we opted to catch a bus from the state of the art bus station. It’s a far cry from catching the bus from Wigan after college. I felt spoilt. It didn’t cost too much to catch the bus, and I deposited my money into the drivers tray whilst finishing off my Corned Beef Pasty which I had purchased in the market hall.

Just a few minutes later and we were at The Liberty. We went straight to the Ticket Office where there were a few people queuing to secure their seat for the evening. Posters of Gareth Bale in his Wales kit were plastered everywhere. The advertising did nothing to help matchday sales as we were able to sit wherever we wanted to really.

Tickets purchased. Matt commenced our mini pub crawl. Strolling up strange winding roads, dark tunnels and the odd ginnel (northern dialect for a passageway between two buildings) we arrived at The Plough and Harrow, Brynhyfryd. A nice smooth creamy pint of Worthingtons followed. I was decimated at a game of pool. We made our way to The Globe Inn.

The Globe was my favourite pub of the evening. I enjoyed another creamy pint of Worthingtons while we watched the BBC News. It was a bit of a surreal moment when the first story on the news was being reported on from Atherton. Unfortunately a girl who lived a few streets away from me had been killed and Atherton was all over the national media, so that put a dampener on proceedings.

Our final pub of the evening was The Railway. I was wearing my Bolton jacket, and as soon as I walked into the place a bloke began talking to me about Kevin Davies after it was revealed we’d be letting him go at the end of the season. I was a bit embarrassed really as our club was obviously being viewed in bad light by people everywhere.

Not to worry though! Another pint down and it was time to walk to the ground again.

We were sat in the East Stand Upper, meaning we were fairly close to the lunatics who had travelled over from Croatia.

Croatia were the overwhelming favourites, but Wales had won their last three matches and they meant business. Buoyed by their 2-1 win away to Scotland on Friday night, Wales still had slim hopes of qualifying for the World Cup.

Wales were struggling with injuries. David Vaughan, Andrew Crofts and Dave Edwards were all out injured. This meant Crystal Palace’s Jonathan Williams was handed his full international debut.

From the off, Croatia were pressing the home side at every given opportunity. Bale, Ledley and Jonathan Williams coped well and were rarely dispossessed.

It was Gareth Bale who provided the first chance of the evening when he skipped past Real Madrids’ Luka Modric before former Man City and Tottenham defender Vedran Corluka hauled the Welshman down. Bale took the resulting free kick and it went just over the crossbar.

Croatia responded when former Arsenal player Eduardo set up Sammir. His shot was deflected just wide, before the ball was eventually scrambled away from the corner kick.

On 25 minutes, Celtic’s Joe Ledley burst through the Croatia defence and was brought down by Lyon defender Dejan Lovren in the area. Replays show that Ledley made the most of it, but the home crowd didn’t care as Gareth Bale smashed the resulting penalty past Stipe Pletikosa to hand Wales a well deserved 1-0 lead.

Croatia then piled on the pressure as they tried to score an equaliser. Bayern Munich striker, Mario Mandzukic found an opening in front of goal, and would have scored if it wasn’t for a brilliant challenge from James Collins.

An entertaining first half should have seen Wales double their lead when Bale was through on goal twice. Only great work from Pletikosa in the Croatia goal kept the score at 1-0.

The temperature was plummeting and the half time whistle was a welcome sound. We descended down to the concourse in search of warmth. I was really tempted to buy a Steak Pie with a Worthingtons gravy, but I took the decision that I’d had enough of that particular ale for the evening.

My Bolton coat was drawing a few unwanted looks, so I decided it would be better to return back to my seat. The idiots who insisted on abusing Craig Bellamy, due to his Cardiff City roots, throughout the first half were still acting like dribbling neanderthals.

During the half time interval, the Croatia boss replaced midfielder Milan Badelj with Gordon Schildenfeld in an attempt to control Bellamy and Bale who had bossed the match so far.

The first real opportunity of the second half fell to Eduardo who headed the ball against the crossbar from a corner kick. A few minutes later and he nearly scored again when he fired a ferocious effort towards goal. Boaz Myhill did well to keep the ball out.

With time running out for Croatia to gain anything from the match on came former Bayern Munich man Ivica Olić and Inter Milan’s Mateo Kovacic. The result was instantaneous.

Dejan Lovren made up for his earlier mistake and scored a fantastic equaliser. He picked the ball out 30 yards from goal, and hit a thunderous shot which swerved just in front of Myhill. It was a fantastic goal, and Croatia were now on top.

With eight minutes left on the clock Ivica Olić somehow managed to scuff an effort over the crossbar from 8 yards out. Wales were treading dangerously, and they were soon punished. Three minutes from time Eduardo brought the ball down well and hammered the ball past Boaz Myhill to hand the visitors all three points.

The defeat means Wales hopes of qualifying for the World Cup are all but over, and any targets of catching up with Croatia and Belgium who top the group are out of the window.

Six months later, Gareth Bale would become the most expensive player in the world when Real Madrid signed him from Tottenham Hotspur for €100 million. Chris Coleman’s tenure as Wales manager continued and two years later they would be ranked ninth in FIFA’s standings, ahead of England.

Croatia qualified for the 2014 World Cup but would return home with just one victory after being put in the same group as Mexico and host nation Brazil. 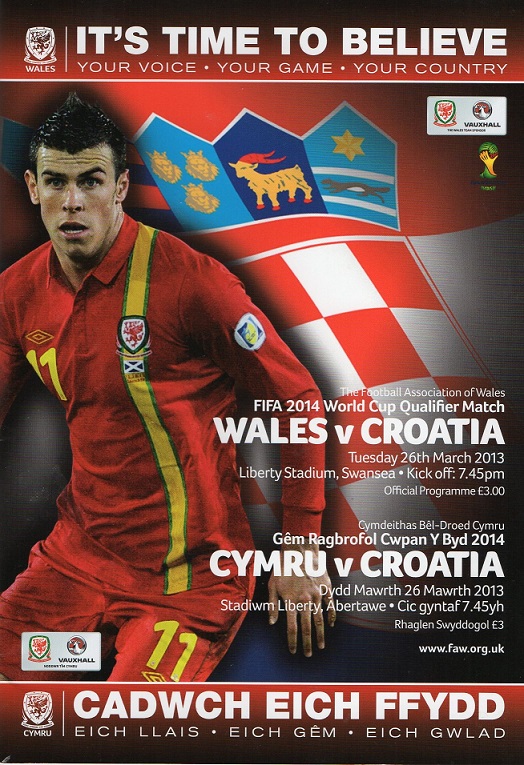