A week ago I had never heard of Penistone Church FC. It was during The FA Vase draw that their name cropped up, due to the fact they had drawn my side Atherton Collieries away in the competition. I was a bit annoyed that we had drawn them at home, as it meant it wouldn’t be another Colls away trip. However, I soon rectified this when I persuaded Stew to come along for the night to do some groundhopping and a little bit of scouting.

It’s not often that you can get to a non-league match on a Friday night whilst the weather is nice, so with high pressure hanging over the north of England it turned out to be lovely evening in Yorkshire. First of all though, I had to get there and I did this by catching the train to Stockport where Stew picked me up. On the way I encountered various groups of drunk James fans who were off to Castlefield, but this was a lot more pleasant than my journey home which can only be described as an episode of Jeremy Kyle; Northern Rail style. More on that later.

Arriving in Stockport, Stew was waiting for me and we were soon on our way to Penistone. I hadn’t realised that we’d be driving along some of the Tour de France route which had passed through the area just days beforehand. The encouraging chalk drawings were still on the road, outlasting both Chris Froome and Mark Cavendish who had both crashed out of the competition.

Penistone is a nice little town which sits eight miles away from Barnsley. As we arrived, yellow banners were still flying, celebrating the arrival of the Tour de France. I felt this was a bit of a cheat from the local tourist board, who on closer inspection were looking to cash in on an event which only came within six miles of the place. I felt this was a horrible trick to play on the locals. They all believed they’d be seeing the world’s greatest cycling event and had even put their own messages on the pavements. We’re unsure whether these scribbles were from the local water board or cycling fans though.

Pondering what the messages could have meant we asked a local woman who was walking alongside us through the ginnel. She couldn’t help us with our investigation but did guide us to a pub which was full of locals who were having a pint after work. This woman was a fantastic advert for the town, giving us advice on where to eat, where to drink and pointing us in the direction of the local landmarks. Stew by this stage was hungry and saw a chippy on the main street.

We asked the woman what the chippy was like, to which she responded “I wouldn’t go there. I don’t trust them. Head down the hill. There’s a great chippy called The Dolphin. It’s near my house!”. We began to wonder whether that was an invititation to head back to hers for a chippy tea and things got more intimate when she began to tell us about her recent crockery purchases. “The portions at The Dolphin are huge. Fish are massive. We’ve had to buy new plates!”. It was with the final comment that she sold the place to us.

The first stop however was the Old Crown pub which was on the corner of the main street. I had a pint of cider which was priced at just £2. A very cheap and nice way to spend pre-match, outside watching the world go by. With half an hour to go until kick off, we headed down the hill towards the chippy – we were by this stage expecting big things. Strolling past the local cinema, Penistone Paramount, the fish and chip shop came into view. Unfortunately our friend who recommended it wasn’t in there; perhaps she had gone home to put the kettle on and warm up a couple of plates for us? The fish was huge and Stew couldn’t finish his portion off, still battling his way through it by the time we reached the ground.

It was free admission for this match, and quite a sizeable crowd was in attendance to welcome NCEL Premier Division side Garforth Town to the Memorial Ground. Last season, Penistone finished fourth in the Sheffield and Hallamshire League before gaining election into the NCEL Division One.

The club was formed in 1909 through the amalgamation of Penistone Choirboys and Penistone Juniors. I can’t find any conclusive definition on the internet, but I assume the club is named after a church which stands just down the road from the ground. St John the Baptist Church is said to have been built in 1200, but there is evidence that parts of it have been stood in Penistone for over 1000 years.

The Memorial Ground has a very nice clubhouse and a small covered stand with ample seating. The rest of the ground consists of hard standing, apart from at the far end where a grass area allows players to warm up behind the goal. Next to the pitch is a small junior set up, which seemed to be thriving, adding to the ambition of this forward thinking and ambitious community club.

Stew and I opted to sit behind the goal at the far end. This seemed like a nice and relaxing way to spend the evening… and it was until I sat on a thistle. I didn’t know that it was a thistle at first, I just assumed they had prickly grass in Yorkshire. You wouldn’t have that problem at Old Trafford. Thankfully the pain didn’t last long and I could direct my attentions to the match. It was quite an equal affair, and you wouldn’t guess there was a divisions difference between the two sides. 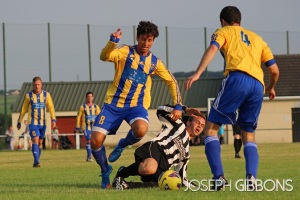 Penistone started off brightly, pressuring the away side at every given opportunity. However, this was the first match of pre-season for Church and they quickly began to tire. Ultimately, Garforth were the better side, but there wasn’t much to choose between the two.

Garforth had a couple of opportunities to open the scoring, but trialists Pauli Graham and Adam Jordan squandered their chances. It was Graham who had the first chance of the match, but his volley fell just wide of the post. Jordan then forced the Penistone goalkeeper into a great reflex save when he looked to have scored. In fact, it was the Penistone goalkeeper who kept his side in the match. He may not have had the most athletic of builds, but he was certainly a great shot stopper.

Penistone took the lead on 43 minutes after they capitalised on some poor defending from Garforth. Defender Glen Wood presented the ball to Mitch Savage who burst through and beat Max Newbould with a low strike.

Both sides changed their players in the second half, with Penistone bringing on a new front line. It was however Garforth who looked more likely to score, with the next chance falling to another trialist in Tom Palmer. His shot beat the Penistone goalkeeper but bounced out off the post.

It turned out to be one of the cleaner matches that I had seen recently, with the referee and his officials having to do very little. The linesman however did come out with one comment which I thought summed up non-league football during pre-season. A Penistone player was clipped as he ran down the wing. He picked himself up and started moaning to the linesman about the challenge. A brief pause followed before the official replied “Well, if you were faster he wouldn’t have caught you would he?”. Never has a truer word been said by a non-league linesman.

The scores were drawn level halfway through the second half when the ball was floated in from the left. A Sam Akeroyd header was blocked by a defender but the ball came to Tawanda Rupere who smashed the ball into the back of the net.

With the sun setting over the stand, the referee blew the full time whistle. We didn’t stick around, choosing to leave straight away so I could get the train back home from Manchester at a reasonable time. I made the second to last train home, which I always say is full of lightweight idiots, as opposed to the last train home which is full of hardcore idiots.

All was fine on the train until we reached Salford and three orange women staggered on. They chose to sit on the seats in front of me. I thought nothing of it until the gobbier one of the group turned around and said “You alright Charlotte? You still having it off with your sisters ex?”. I looked up from my phone, wondering if there was a case of mistaken identity. I wasn’t called Charlotte? She turned out to be the woman behind me, and a domestic soon broke out in full view of every passenger in the carriage. Fortunately, by the time we reached Swinton, Charlotte had disembarked and moved to another carriage.

It had been a lovely peaceful night in Penistone. A really nice club in a small town which has all amenities within a five minute walk. The ground is basic, but it looks to be a work in progress and they certainly have the people there to take them forward.