Sandwiched between the M60 and the Bridgewater Canal, nestled amongst a vast collection of trees and neighboured by the local cricket club you will find New Alder Park. Home to AFC Monton, this ground is yet another in Step 7 which has recently been developed thanks to funding from the Premier League and the FA. While still very basic, a £300,000 clubhouse has been opened in the last couple of months and if such developments continue Monton are a club who could one day make the step up a division into the North West Counties Football League.

AFC Monton had been on my radar for a couple of years, so with my team Atherton Collieries playing a friendly there on a Tuesday evening it gave me the ideal opportunity to tick the ground off. There was a bit of confusion in the days leading up to the match as the Atherton Charity Cup was in full swing and while Colls don’t compete in it, Monton do. They had drawn Atherton Town and were taking them on the evening before we were due to play them. I was sceptical the match would go ahead but in the end it did and Monton took on two Atherton teams in as many nights… those lucky people!

West Didsbury is widely regarded as the place to be in Greater Manchester, with lots of gentrification and hipster places knocking around. Places can only stretch themselves so far before they reach the end of their shelf life and are overtaken by a more random and less well known area. In a recent article from the Manchester Evening News, it is claimed that Monton is now becoming the new West Didsbury. The local newspaper has even gone as far as naming Monton, ‘Monton Carlo’ which has raised a few eyebrows.

I found all of this a bit hard to believe. Despite only being 15 minutes down the road, I knew very little about Monton. Only a small sign on the M602 that says ‘Monton Fencing’ even reveals where the area of Eccles actually is. Unfortunately, I’m still no nearer to finding out what Monton is all about as the club don’t play there and reside in the Winton area of Eccles. The internet does strongly inform me that there are an increasing numbers of bars and independent businesses opening up and there is even a lighthouse in Monton on the Bridgewater Canal… I certainly never knew there was a lighthouse within Salford.

I wasn’t left disappointed with a lack of Monton in my day though, as it meant we could spend the evening in the posh Worsley area. This is a part of Manchester that is home to Ryan Giggs’ restaurant, has a road nicknamed Millionaires Row and is currently under consideration to become a World Heritage Site. I was going to walk to the match down the canal from Leigh to give me something to do but in the end Lee picked Adam and I up and immediately I was keen to try out one of the pubs close to the ground. We opted for the Barton Arms; a pub on the main road which I had passed numerous times and always been curious about. 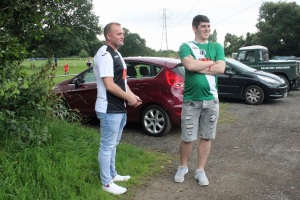 The three of us entered sporting our Collieries shirts and other merchandise we had shoved on ourselves. While there were enough ales to choose from, the poor girl behind the bar struggled to find them all on the till and it eventually took us ten minutes to get our drinks. Of course, I chose an obscure one which ran out halfway through being poured and I was subsequently presented with that awkward moment where you have to quickly point to another beer as quickly as possible. However, I was in a laid back mood and there was no way I was being rushed into a decision. Lee shouted at me to hurry up (he looked like he could pass as my father by this stage) and I eventually chose a generic beer from Newcastle.

With around 45 minutes until kick off we left the pub and made the one minute drive up the road to the ground. It is found just off the main road through a wooden gate which is lodged into a seemingly never ending hedge. Colls club secretary Emil was making his way down the main road having just caught a bus from work in Manchester; it was quicker than heading home. While walking down the dirt track into the ground, he announced that he had played here once but wasn’t quite sure… shows it must have been quite a few years ago now!

As is usually the case with pre-season friendlies, we headed straight over to the pitch to see if any new faces would be featuring for Colls in this game. With two of our goalkeepers away on holiday, we drafted in Ashley Firth who had played for FC United against Rochdale just three days previously. We also had a new right back Jamie Forbes who had signed for Evo-Stik Premier Division side Ashton United over the summer having previously been at our bitter rivals Radcliffe Borough and Atherton Laburnum Rovers which didn’t go down too well with me.

A brand new clubhouse has recently opened at the ground and this is where the 40 or so Colls fans camped themselves for the evening. There were a wide selection of beers available in can form and opposite was another serving hatch which was offering pies and other local delicacies. It was all rather nice and certainly a good facility for a Manchester League side to own.

The overhead power lines which straddle the neighbouring M60 passed over the top of the penalty area at the clubhouse end of the ground. We wondered what would happen if a lobbed effort came off one of the lines and deflected into the goal. Were there contingency plans for such an event? Thankfully we never had this problem, as both teams played neat passing football on the floor throughout the match. There were times when Monton enjoyed prolonged periods of possession, showing that they will be a decent side in the Manchester League once again this campaign.

In their old red kit, Collieries opened the scoring with their first attempt of the match on three minutes. Mike Itela picked the ball up deep on the right hand side and squared the ball across the floor to Mark Battersby. The striker finished into a practically empty net as the goalkeeper tried to cut the cross out at the near post.

Fortunately for all involved, this match didn’t turn into a rout and Monton took the game to the visitors. The home side looked dangerous down the right hand side thanks to a pacy winger who Chris Pauley had to work hard to deal with. Collieries’ coaching staff were keen to stress that their players should be pressing their opponents when they weren’t in possession and this approach ultimately led to an abundance of chances.

Itela was fed through on a few occasions, only to see the linesman’s flag waving for offside almost every time. Mark Truffas was allowed a lot of freedom down the left hand side and the match started to become more stretched as the half wore on. On 39 minutes, the Monton backline was breached twice in less than a minute to make the scoreline 3-0.

The first goal saw Mark Battersby play the ball through to Mike Itela who on this occasion managed to beat the offside trap. Monton’s high backline were unable to track back and catch up with the pacy forward. Baring down on goal, Itela slotted the ball neatly into the bottom left hand corner with the outside of his foot. That was his second goal in as many matches over the summer.

Collieries regained possession straight from the restart and this time it was Battersby who was set free in an almost identical move. This time however, the striker opted to take the ball slightly wider and hit the ball across the face of the goalkeeper. Despite getting a strong hand to the shot, the pace took it bobbling into the right hand corner.

A bizarre moment arrived four minutes before the interval when a Monton defender attempted to clear the ball. He was stood around a metre from his own net, which had been vacated by the goalkeeper who had tried to deal with a previous shot. Battersby was on the defenders back, and with no other option than to try and kick the ball out for a corner kick, the defender hoofed it and miscued the ball against the post and away from danger. It could have been one of the most comical own goals of the year. He meant it though, of course.

At half time we headed back to the clubhouse to indulge ourselves in more beer. It was a nice summers evening so I opted for the Strongbow Dark Fruit, a drink which goes against everything I believe in but just seems suitable on occasions.

The interval lasted all but a few minutes as light was fading and no floodlights were available. Collieries added to their advantage thanks to a Gareth Peet cross. On 58 minutes he took on the right back and crossed towards the back post where a stretching defender prodded the ball past his own goalkeeper.

The hosts then had a number of efforts on goal but all were dealt with by Firth who looked comfortable and commanding in his role as Collieries custodian. A fine effort did produce a goal for Monton on 73 minutes when a lobbed effort from the angle of the penalty area flew into the top corner past Firth.

Scoring was rounded off on 82 minutes when Jordan Cover was played through down the right hand side. He cut inside and unleashed a stinging shot towards goal, which was parried by the goalkeeper. Cover was first to the rebound, just beating the goalkeeper to it. He chipped the ball delicately over his opponent, generating just enough backspin on it to make sure it didn’t fly out of play. He then side stepped and was able to pass the ball into an empty net. Quite simply a classy finish from a player who is brimming with confidence and currently enjoying a fantastic run of form.

Like an Olympic athlete who had been sapped of all energy, the daylight soon gave up and the match ended as night time swept across Winton. We headed straight back off home safe in the knowledge that proper football would soon be upon us and pre-season had now ended. AFC Monton is a decent club and one of the more sophisticated in the ranks of the Manchester League.