It was late on the Sunday evening when I planned my trip to Ashton United. After spending the festive period in bed, I decided it was time for an adventure; football related of course. So after scouring the fixture lists for Premier League, Football League and eventually non-league matches I chose the local Northern Premier League encounter between Ashton United and Northwich Victoria. My decision was confirmed when I discovered the lads from ‘1LegOnTheCup’ were also attending the fixture.

My delightful Northern Rail frenzy commenced when I caught the 12:45 service from Atherton to Manchester Victoria. It was then time to venture where no Lancastrian has ventured before… Platform 1 at Victoria! For those of you who aren’t familiar with Manchester Victoria – Platform 1 is usually where our friends from Yorkshire are found.

The Northern Rail Train; slapped with ‘Visit Yorkshire’ livery eventually turned up. It wasn’t too long before I arrived in the town of Ashton-Under-Lyne. Now, as I had never been to Ashton in my life I got completely lost… and my GPS didn’t do much better as I eventually ended up in IKEA’s car park! After my GPS had sorted itself I realised I was going the wrong way, so I set off on my tiring trek uphill.

It was a mile walk to the ground, and the majority of it was uphill. I began to realise I should have planned this out more. As my legs were failing, and my back was hurting. I was tempted to put my arm out and ask one of the hundreds of Northwich fans for a lift… But I didn’t give up! Eventually arriving at Hurst Cross at 14:02. 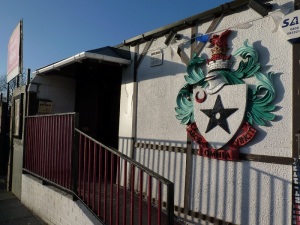 After taking some photos outside I was invited into the Social Club by two very polite and welcoming blokes. I went inside and everybody was watching the Edinburgh derby – Hibernian v Hearts. It was almost finished, but at least I saw a goal!

The Social Club was by this point full of visiting Northwich Victoria fans… and I looked like a bit of a loner, so I went into the ground.

Walking along the main road to the turnstile I noticed 1Leg and Rhino! I caught up to them and we went through the turnstiles together. This is where I was not happy. It claims on Ashtons website that Under-16’s gain free admission with a full paying adult. Now, I know I technically wasn’t with them at this stage, but as far as the turnstile operator could have been concerned I was with them! – I am yet to write to Ashton claiming a refund of £5.

After receiving what I can only describe as a cloakroom ticket to prove that I had paid, I then purchased a programme. The programmes at Ashton United put even some League One teams to shame! Priced at only £2 they are definitely value for money. 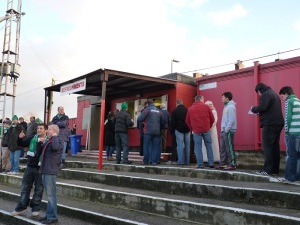 After having a chat, the three of us decided that we’d have an early pie break. Tony even persuaded me to invest in a bovril – which I have since been told wasn’t actually a bovril, and was infact a fake. I bought a steak pie for £1.50… and my word – If Carlsberg did pies! The steak was surrounded in a gravy type mixture which melted in your mouth. I could even go as far as saying the pie rivals Galloways of Wigan. We were informed that the pies are ‘Carrs of Stalybridge’.

Whilst purchasing our pies we were informed by the woman that the Refreshments Hut had been ransacked the night before. The thieves got off with a selection of cold beverages from the fridge and were later caught by the local police!

Hurst Cross has a nice scenic feeling to it, and put a couple of League Two teams to shame. Records show that Ashton started playing their football at Hurst Cross in 1880, meaning that it is one of the oldest, constantly used football venues in the world.

We perched ourselves next to the seated area of the ground. The Sid Sykes Stand is the most prominent feature of Hurst Cross and has a total of 250 seats. This is the only seated section of the ground, and it also houses the players facilities.

Opposite us stood The Popular Stand. Running the length of the pitch it offers covered terracing. The travelling Northwich Victoria fans made themselves at home well before the match and created a decent atmosphere… Despite leaving their drumsticks on the coach! 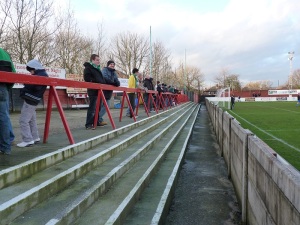 The other two sides of the ground are made of open terracing, bringing the capacity of Hurst Cross to 4,500.

The teams came out, and it was the Northwich fans that were making all of the noise! You’d have mistaken it for their home fixture. This surely put a smile on Vics Chairman; Jim Rushe’s face. 1Leg and Rhino introduced me to him… They know him well after watching Northwich numerous times this season. Rushe seems like a very nice man!

Ashton went into the fixture struggling near the bottom of the table. Northwich on the other hand found themselves closing the gap on league leaders Chester FC. The match itself was a rather one sided affair and there was only ever going to be one winner.

The first chance of the match fell to the visitors when Jordan Johnson ran down the line and swept the ball in to find Wade on the back post. Wade missed the target and hit the large metal fence behind the net. 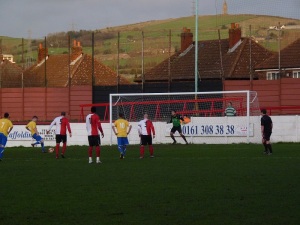 Unanswered Northwich pressure finally paid off on 27 minutes when the instrumental Johnson was tripped in the box. Tom Field sent Ashton keeper Terry Smith the wrong way to give them a well deserved lead.

Ashton nearly equalised when Warren Beattie dispossessed Johnson on the edge of the box; much to the anger of Vics psychotic assistant manager Andy Morrison. Morrison is possibly the strangest man I have ever encountered at a game of football! And this is coming from a lad who has a season ticket at The Reebok!

The last chance of the half fell to Ashton. Iain Bennet turned Tom Smyth before launching a curling effort towards goal. It looked to be creeping into the bottom corner before Ben Hinchliffe tipped the ball around the post.

The half time whistle blew, and it was time for another delicious pie. This time we went for a meat pie… due to the fact they had run out of all other flavours. I also had a gander in the metal container which had been converted into a club shop. Inside they had a wide variety of football memorabilia and Ashton United shirts.

As the second half began, the sun began to set across the scenic hills above Ashton.

It was Northwich who started the second half the better of the two teams and they doubled their lead shortly after the 50 minute mark. Johnson sent Wade down the wing and he fired towards goal. The ball was blocked by the keeper, but unfortunately for him it took a cruel bounce over him – leaving an easy tap in for Chris Budrys.

Vics nearly scored their third when they broke from an Ashton corner. Wade beat a couple of players before firing just over the crossbar. It was a good job the metal fencing had been installed, otherwise we’d have ran out of footballs!

Marlin Piana should have pulled a goal back for the home team, but as so often had been the case for Ashton; their shooting was poor. Very poor.

On 81 minutes Northwich sealed the victory when Budrys guided Wades cross into the bottom corner.

5 minutes before the end of the match Rhino gave me a lift back to the train station in his pick up. Heaters on full blast of course! I didn’t have to wait long before I caught the train back to Victoria, before then catching my luxurious train back to Atherton. 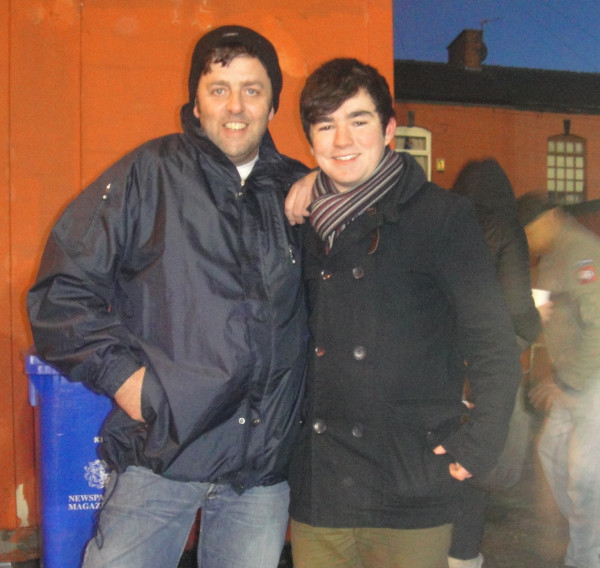 If you would like to read 1Leg and Rhinos thoughts on the match, including a detailed pie review then visit their blog here – http://1legonthecup.com/ – It is well worth a read! Also, you can follow their adventures on Twitter ‘@1LegOnTheCup’. 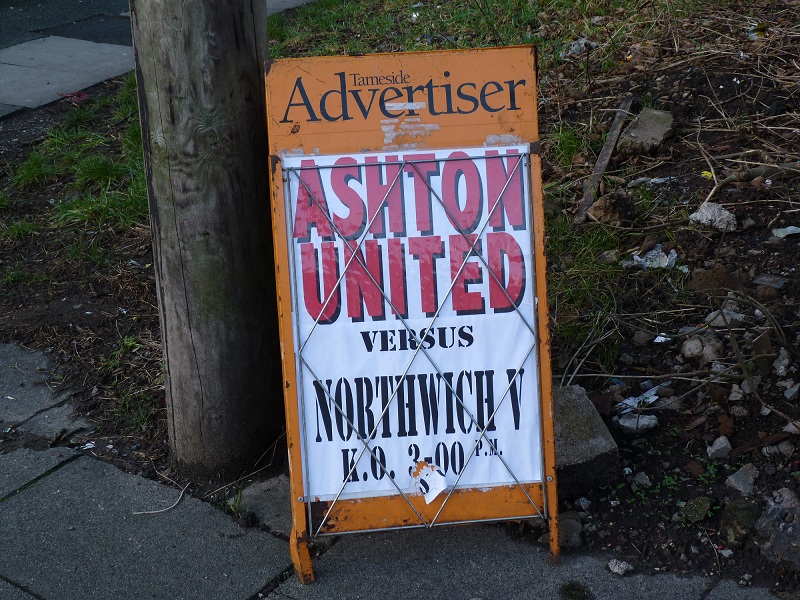 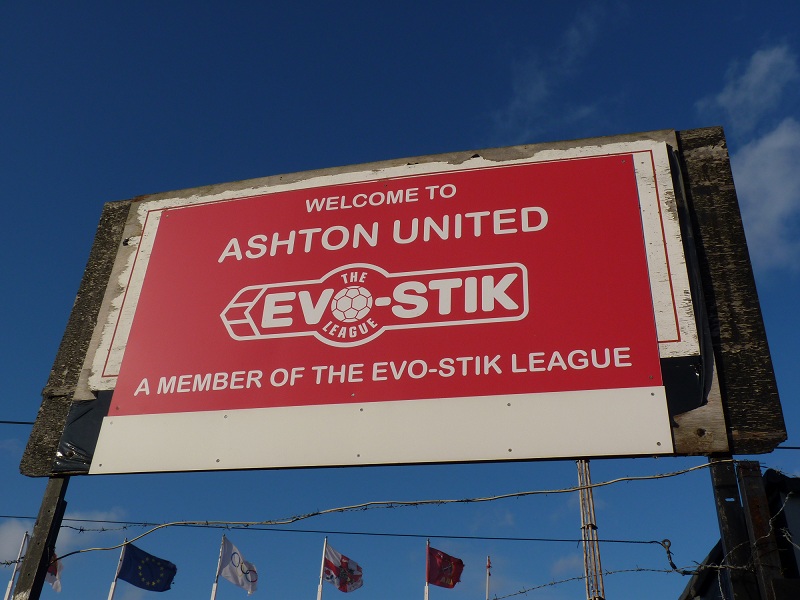 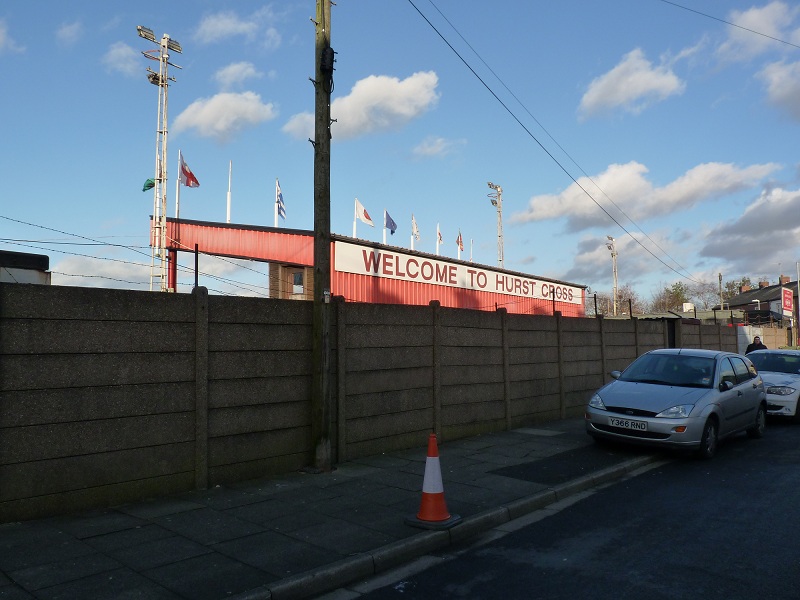 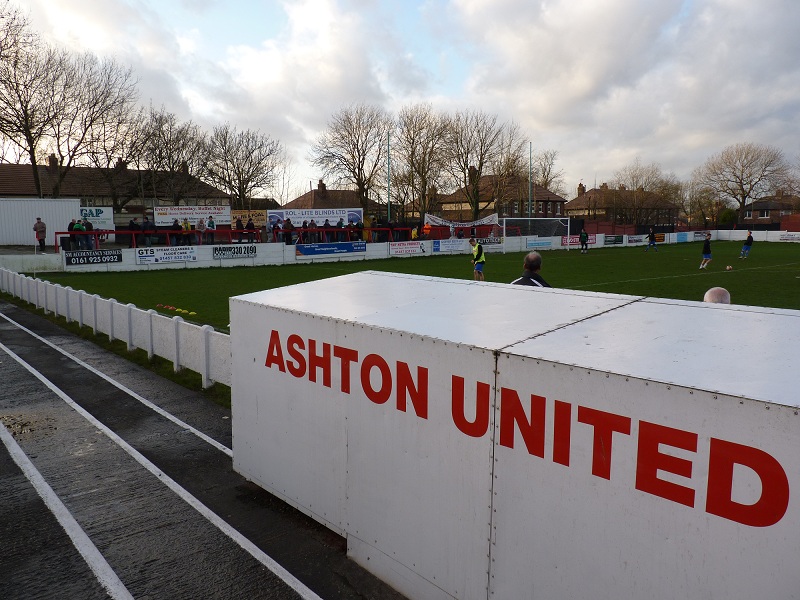 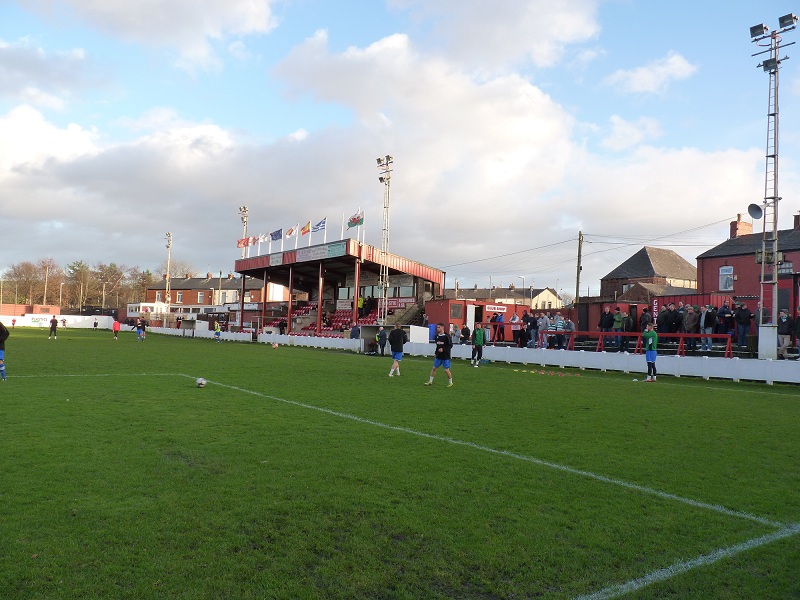 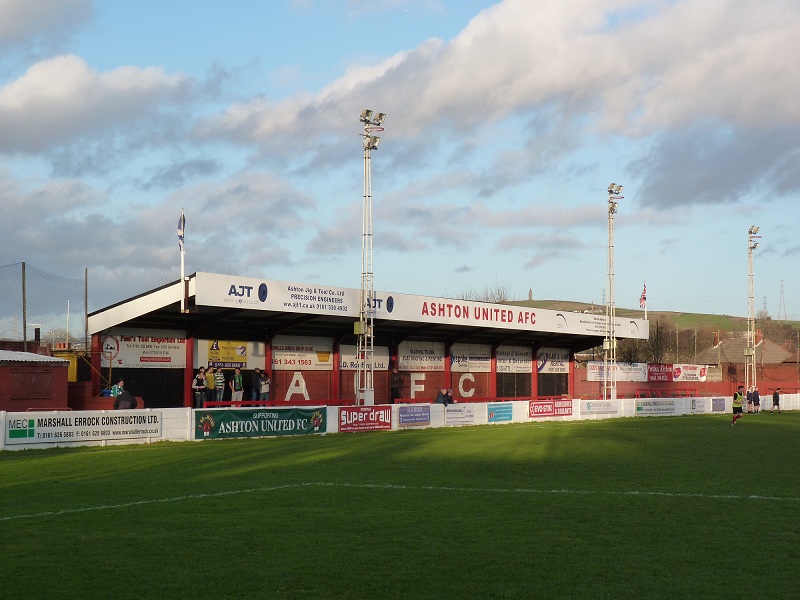 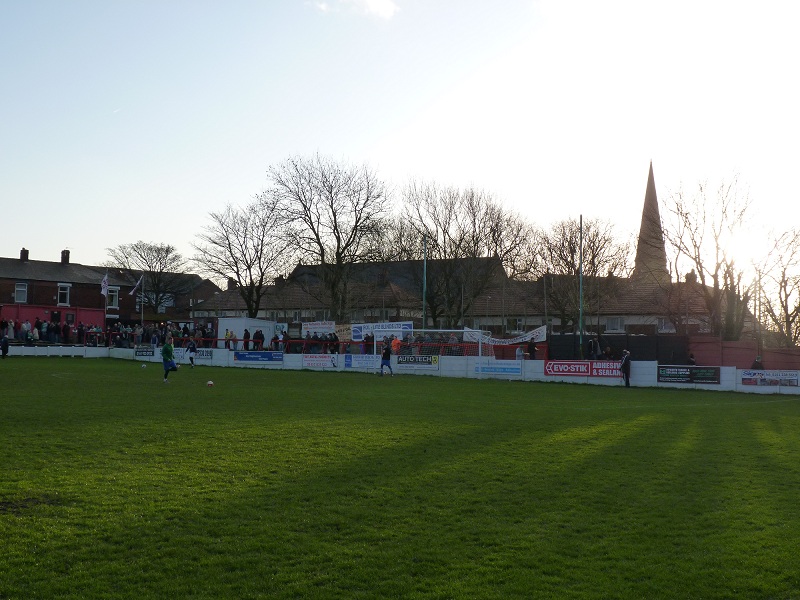 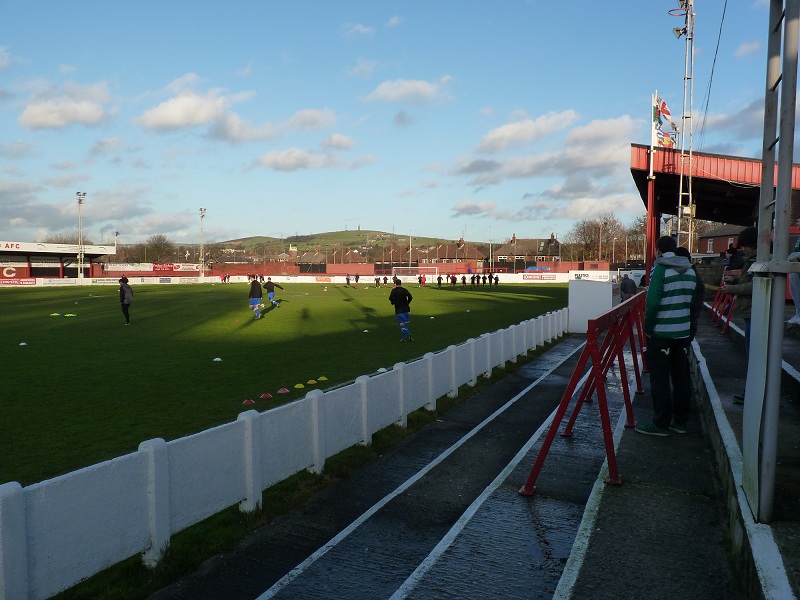 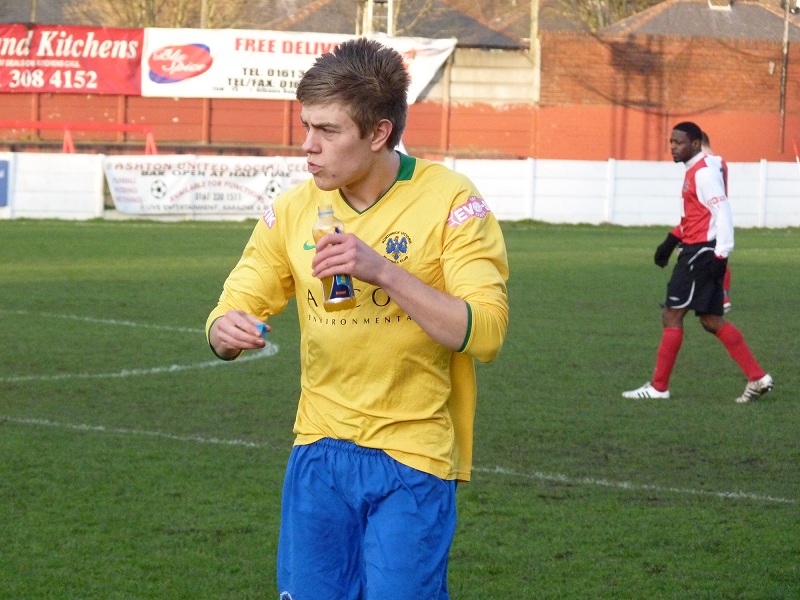