Another trip to London with my Mother was booked. However, there was a slight problem. The fixture list hadn’t yet been released, meaning we had no match to go to! We had agreed to go to either West Ham or Brighton if they were at home. Sods law! They were both away from home! So we decided to go to the most modern of all the stadiums available – The Madejski.

Built in 1998 the stadium is named after club chairman John Madejski, and replaced Elm Park as Readings home. The Madejski Stadium is also home to Rugby Union team London Irish.

When we booked the trip we thought we’d be wearing thermals and drinking from flasks. How wrong could we have been? England was basking in its hottest weather for months. October 1st turned out to be the hottest October day on record and temperatures reached 31 degrees in Reading.

Setting off from London Waterloo at 12:00 we caught the tube up to Paddington, then the Great Western service to Bristol. Stepping on the train was a welcome break from the heatwave as it was fully air conditioned! This was a somewhat brilliant experience. You southerners may be thinking… “Wow! Big deal!” – If you have ever been on a Northern Rail service you will understand why I got very excited.

The train journey to Reading took only 20 minutes, and we arrived at 13:30. After reluctantly deciding it was too hot for a pie we nipped to M&S to buy some snazzy southern sandwiches before our onwards bus journey to the stadium.

This is where we got completely lost. We needed to find a particular stand in order to get to The Madejski. There were no signposts, and the station was under refurbishment meaning it was all too confusing.

After 10 minutes of walking up and down trying to find somebody in a football shirt, we asked a man in a fluorescent jacket – Always a winner. He pointed us around the corner where there were around 5 buses parked up. They weren’t just any buses though. These buses looked like something from the future; Double deckered, air conditioning, comfy seats, WI-FI! AND they were hybrid! A far cry from my local bus route – 582 from Leigh to Bolton. 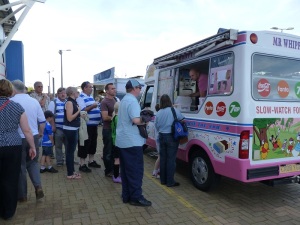 We arrived at The Madejski and it reminded me of our visit to the Ramon Sanchez Pizjuan (Sevilla) a couple of months earlier. Weather wise of course… Nothing else! It was that hot we couldn’t wait to get inside and enjoy a bit of restbite in the welcoming shade. Reading had even catered for the occassion and had drafted in an ice cream van!

Programmes at Reading are of decent quality and are priced at £3. I also recieved a team photo from a group of Sky Sports Cheerleaders! I also purchased a Reading FC polo shirt for just £10 which allowed me to change out of my now soaking wet Bolton shirt.

Sitting in the lower tier of the West Stand offered a great view of the pitch. Saying that though, there isn’t one spot in the stadium which offers a poor view. It is an extremely well designed arena.

To my left was the North Stand – I don’t have any interesting facts about this stand, apart from the fact its capacity is 4,946. Oh, and there was a strange looking man taking photos of the cheerleaders and other women at half time.

Opposite was the East Stand. If you are a fan of the sun, then this is the stand for you! The most exciting feature of this stand? It has a smoking section outside.

The away fans were housed in the impressive looking South Stand. With a steep gradient it looks like a fantastic stand in which to create an atmosphere in.

The fact I haven’t written much about the stands is nothing against The Madejski – In fact I really like it. However, all of the stands are a bit too generic and have nothing to them.

Middlesbrough had started the season off very well, and were the in form team going into the fixture. Marvin Emnes had been in rich goalscoring form, and was obviously the man to watch. Despite the match finishing 0-0, it was a hard fought, enthralling contest between two footballing sides.

Reading started the game brilliantly, piling vast amounts of pressure on the Middlesbrough defence. Reminded me of watching Bolton really… Lots of pressure, but doing nothing with it.

Carl Ikeme in the Middlesbrough goal was the man responsible of keeping out Reading striker Adam Le Fondre (Who I look like according to @Only1Eliza – Mark Jupp).

However, it was Federici in the Reading net who produced the most saves as the match progressed. On the half hour mark he made a great double save to prevent Marvin Emnes from giving his side the lead.

It was goalless at half time after what had so far been a thrilling end to end encounter.

As the stands at The Madejski are all connected I decided to go for a walk around the stadium. It somewhat reminded me of the best stadium in the country – The Reebok.

I realised just how lucky we were sitting in the West Stand, with everybody in the East Stand suffering from sun stroke and dehydration. However, their plight was short lived when Readings generous mascot – Kingsley The Lion – came around and handed out some free Dominos Pizza to some lucky fans! Just what you need in this weather!

I later found out that Kingsley is a character amongst football mascots. He isn’t quite as good as the breakdancing badger at Fulham, or the foulmouthed Duck at Preston, but he has once been sent off!

“During the first half of the home match against Newcastle on April 30th 2007 Kingsley was shown a red card by referee Mike Riley for standing too close to the pitch. It was reported that one of Rileys assistants confused Kingsley for one of the players and nearly flagged him for offside. Steve Coppell, the Reading manager said – “I can see why the referee was getting confused. He does look like so many of my players”.

After using my camera to great effect – zooming into my mother from across the stadium. It was at this point I noticed another man with a camera. He was zooming into a womans behind and taking photos. Now, I may have caught the wrong end of the stick… They may be related. However, I highly doubt it as he did look like the type to do such a thing.

The second half kicked off, and the children in front of me discovered the joys of shouting abuse at players who came over to take corners. The victim this half was Middlesbroughs Tony McMahon. He was subjected to many awful words such as; “Fatty” and “Sausages”.

Middlesbrough were shooting towards their own fans, which resulted in the team playing with far more confidence and danger. Boro were unlucky not to take the lead when Emnes hit the post.

The final stand out opportunity of the match came when Barry Robson turned the Reading defence and also saw his shot bounce off the upright.

We exited the stadium not having a clue how/where to catch our bus back to the Train Station. So after running about, looking at the service on each and every service we finally found it. At first it all seemed a bit disorganised, but this was probably because we weren’t regulars.

We really enjoyed our day out at The Madejski. Despite it being different to many modern stadia, it isn’t a stadium I would rush back to. However… If Bolton or Wigan draw them in the cup, I will definately be back!