This was the fourth groundhopping adventure that I had embarked on whilst living up in York. Previous visits to Selby, Heanor and Parkgate had got me back into the swing of things following a quiet mid September. I was heading north this time to County Durham where two of the lowest ranked teams remaining in the FA Cup would battle it out for a place in the First Round Proper.

The first match at Norton’s ground in Smallthorpe, Stoke-on-Trent, ended in a 1-1 draw meaning a relatively quick turnaround to get this hugely important fixture on. Meanwhile, there was other business to look after down at FA HQ. The draw for the First Round took place on the Monday evening down at St. George’s Park and it was broadcast live on BBC Two. Guests included the Glossop North End U10’s side, Phil Neville, the England women’s team, Shaun Reid (the Warrington Town manager) and Norton chairman Steve Beaumont. 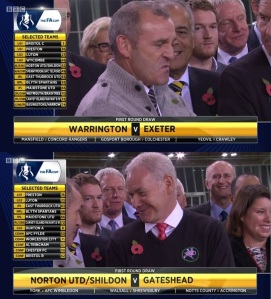 Warrington drew Exeter City at home; earning them £67,000 from TV revenue alone. Shaun Reid didn’t look too happy when the ball came out. Maybe I’m being a little bit harsh, it’s just the screenshot I took, but it does look amusing when compared to the reaction of Beaumont who turned to face Reid when Norton/Shildon drew Conference Premier side Gateshead at home. Not as much money involved for the two sides in action, but I’m sure nobody in these parts cared one little bit.

I had never been to an FA Cup match of such magnitude. Yes, I went to the FA Cup final last season (which I’m still yet to blog about) but what does that actually mean to fans? To the Arsenal fans who saw their team actually win a trophy for once it meant they had a trophy. The Hull fans saw their side enter Europe, which provides a steady income stream for a short time, but is that needed? Victory for either Shildon or Norton in this match would possibly provide enough money to set them for years if spent correctly.

So, with such a momentous day ahead of me, what did I do with myself? I attended one lecture in the morning and then invited Ben around to play corridor football with me at my flat. Basically, all the girls were in lectures for the day so I could do what I wanted to do without being judged or labelled as immature. I was victorious over my younger, yet vastly taller opponent who was enjoying his week of half term from York College; those were the days.

Local groundhoppers John McClure and Paul Brockett had been nice enough to give us the opportunity to tick this ground off by offering us lifts there. Ben and I set off on the arduous journey to Acomb Green on foot. It took over an hour and the last half a mile required a jog as we were still late. John expected us students to be late, but in our defence we were only three minutes over the designated pick up time. Although, John claims we were 63 minutes late as he still hadn’t put his clock back an hour.

That’s right, the clocks had gone back an hour and it was already dark as we headed to our pit stop which was in Thirsk where Paul would pick us up and drive the remainder of the journey. We pulled into Shildon at around 19:10 and found parking in a small car park where the Norton United team coach was parked. The transport for the evening had been borrowed from their bigger neighbours Port Vale, and the team really did look the part. One local driver did reverse into the front of the coach and minimal contact was made, but everybody lived to tell the tale. Infact, it was only myself, Ben and the car driver who noticed as the coach driver was too busy dusting.

Shildon is a small town in County Durham, situated two miles south east of Bishop Auckland and eleven miles north of Darlington. The town is known for it’s once thriving railway industry which came about when the Stockton and Darlington Railway established its workshops there in 1825. The town is now home to the Locomotion Museum which was opened in 2004 by then prime minister, Tony Blair.

It comes as no shock that the football club – which was founded in 1890 as Shildon Athletic – are nicknamed The Railwaymen. A long history has seen five Northern League titles arrive at Dean Street along with a place in the FA Cup First Round in November 2003, when they were eventually beaten 7-2 by Notts County at Meadow Lane.

A small queue was forming outside Dean Street for this match and with programmes already sold out there were a few people walking around with disappointed faces. I was annoyed and disappointed, but I didn’t let it ruin my day. I’ll just never visit Shildon again and I hope they get demoted into a pub league. I’m joking of course… but if anybody reading has a spare programme I’d gladly add it to my extensive collection. I’m only missing two programme from matches I’ve attended; England v Finland U20’s in 2002 and Atherton Collieries v Rochdale Town a couple of seasons ago when we were stormed by groundhoppers who insisted they needed programmes. I selflessly handed mine over and we’ve never printed another one. Enough of my sad little life, surrounded by programmes, cats and empty beer cans and back to the evening of football.

Dean Street is a rather basic ground, with one huge stand which sits opposite a newer and smaller shed terrace. The Main Stand is one of the scariest structures I have been up and I have scaled both the Shard in London and the tree which sits in the park behind my house. Built in 1923, the steep gradient and sheer drop in between each step nearly had me in A&E for the evening. I honestly looked around at all the old men with walking sticks around me and wondered how they had got to their seats. At least if they do fall over the floor will be dry as the roof on the stand is relatively new. The players facilities and press facilities are found at this side of the ground alongside a small club shop which stocked one of the best items I have seen on my travels… the Shildon onesie. 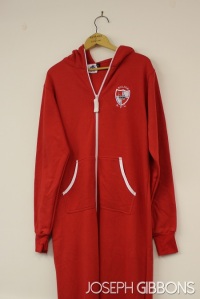 I was tempted by the Shildon onesie, and I’m sure the woman in the shop thought she had a sale to her name, but it looked slightly too big for me and in all honesty I use onesies around twice per annum and I’m happy with my tiger one.

The other shelter at the ground as mentioned before is a shed structure. It was built at the ground to accommodate Northern Premier side Bishop Auckland when they ground shared at Dean Street whilst their Heritage Park ground was constructed. Originally called the Brown Street End, it was renamed in honour of player Lee Hainsworth who died in a car accident on his way to training in 2004.

The far end of the ground sees a huge net protect terraced housing from some almost certain smashed windows. The netting had been decorated with an assortment of flags, namely those of Sunderland fans who also have a soft spot for their local non-league side. In fact, there were hundreds of Sunderland, Newcastle, Middlesbrough and Darlington fans cheering on Shildon for this match. That’s one big positive of non-league football, the fact that all of these fans can come together to cheer on the same set of lads for 90 minutes and everybody can get along.

Both sides sat mid table in their respective divisions going into the match. Shildon of the Northern League Division 1 and Norton United one division higher in the Northern Division One South. There was no separating the two sides and Shildon’s direct style of play – in my opinion – saw them unlucky not to go through against a side who didn’t offer much for long periods of the game.

Neither side created much in the opening exchanges of the game with Shildon’s Ben Wood and Norton’s Kyle Diskin having the only opportunities of note. 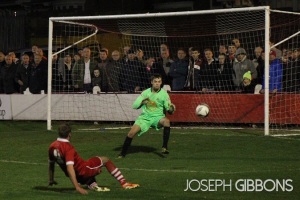 The visiting side took the lead on 38 minutes with their first shot on target. Tom Winkle and Diskin combined to set up Lee Cropper. Capitalising on Shildon defener Carl Jones’ slip, Cropper was able to dispatch the ball into the back of the net. Just before the break, Shildon had a goal wrongly disallowed for being offside when Lee Scroggins burst through.

Norton doubled their lead on 53 minutes with a fantastic shot from Diskin. The Railwaymen failed to deal with a fast attack and the ball found its way to Diskin on the right hand side of the area. He hit the ball first time into the top left hand corner and ran off into the corner to celebrate with his ecstatic team mates. Also in that corner of the ground was an onlooking Gary Mills who was obviously in attendance to see who his Gateshead side would be up against in the next round.

From then on it was the home side who looked the most likely to score and that is just what they did on 73 minutes through Paul Connor. He thumped the ball into the bottom left hand corner to bring Dean Street to life for the first time in the evening.

Wave after wave after wave of Shildon attack reigned down on the Norton defence, but somehow they held out and secured a spot in the First Round of the FA Cup for the first time in their history. The small travelling contingency of Norton fans could be heard loud and clear as the management team and substitutes poured on to the pitch to celebrate with their team mates. The film crews were straight on to the field of play to capture the moment on film… so what did the Norton team sing?

I found it amusing, but I don’t think many of the home fans did. As much as I enjoyed the match I am glad it didn’t go to extra time as I was still feeling a little bit raw from the night before and I had some work to finish before I went to sleep for the evening. In hindsight an evening in bed would have been far more beneficial for me both physically and mentally, but I couldn’t care less. It had been a fantastic night out and I can’t wait for this stage of the cup to come around again this time next season.

I definitely want to visit Shildon again sometime so that I can explore the area more and more importantly purchase a programme! Paul and John kindly dropped Ben and I back off in York and it was then time for a few hours sleep before a full set of lectures at University. The girls in the group may have been out for one of the student nights, but I had witnessed a great match, so I was the happier… and fresher. 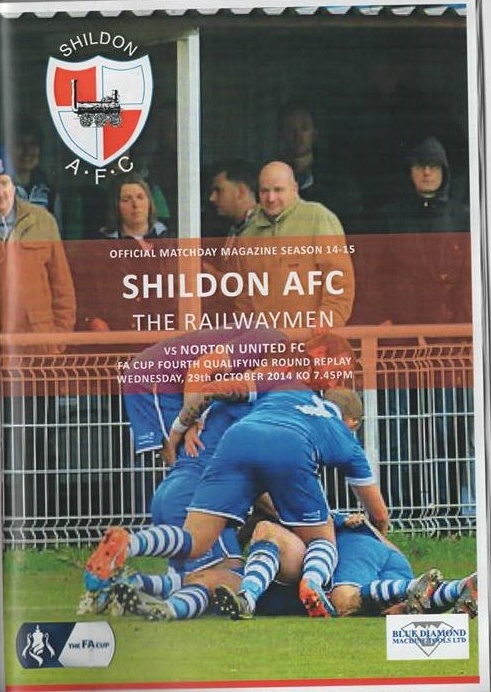