The BBC news crews were live from Bolton, reporting from outside the Town Hall as one of the largest towns in Europe continued to extend it’s lead at the top of the Covid-19 cases league table. I was sat just a few minutes away, pretending to watch as I ate my tea. Bolton had fought off stiff competition from nearby rivals (and initial league leaders) Blackburn with Darwen to ensure that for once, we found ourselves at the top of a league table.

The town is currently the only area in England that is subject to a ‘full lockdown’ in which places such as pubs and restaurants can’t be open. I’m okay though, strategically we live less than a minute over the border into Wigan. It conveniently means, if I turn out of our estate and turn left, the pubs are shut. If I turn right, they’re open. It’s a ridiculous situation but football it appears, is still allowed to be played.

So, it felt somewhat strange as I looked down at my phone, refreshed my Twitter feed and saw that Bolton United were advertising a friendly match against Stoneclough in a couple of hours time at Bolton Arena. Not that they were doing anything wrong, of course they were allowed to stage the match but it did make you question what ‘local lockdown’ actually meant in practice, if you were still able to attend a match.

The venue for tonight’s match was Bolton Arena, which sits just over the road from Bolton Wanderers’ stadium. It would prove to be a relatively elusive tick as well, with Bolton United normally playing their home matches at Ladybridge FC, just down the road in Lostock. The latter is a venue which is used by a number of clubs for training, including Atherton Collieries, so I assume it was already booked up on this occasion.

Bolton United are a club that first caught me eye a couple of years ago after gaining promotion into the Manchester League Division 2 (the 14th level of English football) for the start of the 2019/20 campaign. Up until that point, I hadn’t heard of them.

It’s an ambitious step up from United, who started playing football ‘properly’ in 2001 when they changed from playing five-a-side football, to the full version of the game. Now playing 11-a-side, they enjoyed immediate success in Sunday League football, winning consecutive promotions and ending up in the Mid Lancashire League.

From what I can gather, United had played at the Bolton Arena on a regular basis in years gone by but in order to step up into the Manchester League, they needed a more secure agreement, which they found through moving to Ladybridge FC. So, this in a sense, was a rare return to their former ground.

What makes Bolton United different to other clubs, is the fact their management team and squad comes predominantly from the Asian community. I’ve often wondered why Bolton, which has one of the largest Asian populations in the country, doesn’t really produce many footballers who go on to play even in the lower end of the pyramid; the NWCFL and the Northern Premier League. Really trying to rack my brains, Sakeel Abdullah, a tricky striker who had successful spells with Daisy Hill and 1874 Northwich, is the only player who springs to mind. Hopefully though, the hard work that Bolton United are doing, especially at youth and junior level, could provide a much needed stepping board for local lads. 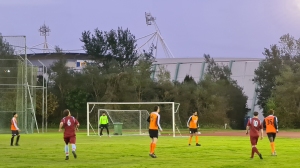 The Bolton United side were skilful and knocked the ball about brilliantly; far better than I’ve seen a number of NWCFL teams do so. From the outside looking in, it was as if the club had built a strong squad, where these lads felt comfortable. They were simply happy to play with their mates, as I’m sure a few could definitely be snapped up by clubs higher up the pyramid.

It took me just over ten minutes to reach Middlebrook, the area far to the west of Bolton where the Arena and Stadium are found. The large and imposing Spirit of Sport monument sat, shining on the roundabout, while Winter Hill and Rivington were still visible in the near distance as the sun began to set.

Standing at 30 metres high and constructed out of stainless steel, the Spirit of Sport is a piece of public art which is dedicated to Bolton’s diverse and inclusive sporting community. It felt quite fitting that I passed it on my way to watch Bolton United, a football club who pride themselves on this very ethos and approach.

Standing ‘a few feet’ taller than the Angel of the North (which seems as deliberate now as it did when it was built) it has greeted visitors to Bolton Wanderers matches – and my mum when she does the big shop in Tesco next door – since December 2005. There were concerns when it was being erected about whether it would all hold together, when it transpired that the resin used to glue the individual images of local sporting heroes on to the structure didn’t actually work in cold weather. That’s right, the glue didn’t work in cold weather. A reminder, this was December in Bolton.

In total, the sculpture has space for 900 individuals, with around 700 of those currently filled. Along with the obvious inclusions of Nat Lofthouse, Amir Khan and Jason Kenny, there are some very questionable inclusions such as former Wanderers players Les Ferdinand (12 appearances, 1 goal) and Júlio César, a centre back with 21 appearances for Real Madrid but just five for the Trotters. These were two examples of athletes who just happened to be in the right place at the right time.

Around the bend from the statue, I turned left off De Haviland Way and into the Arena car park, where there were a handful of spaces remaining. The Arena is a structure that is often overlooked by the more important facilities over the road, but since being built in 2001, this place has held some pretty impressive events in it’s own right.

Built as a venue for the 2002 Commonwealth Games in Manchester, the Arena hosted all of the Badminton events. The logo of the games is still present, if you look hard enough, hidden away underneath the shrubbery that laps over the exterior fence of the development. Since then, it has also hosted tennis matches in the Davis Cup, with Great Britain beating Tunisia here in 2011. It’s also become home to the ‘Made in Manchester’ gig every summer, which stages all the best tribute acts from the cities music scene, such as The Oasis Experience, Noel Gallaghers High Flying Carpets and Buzzkocks who are all booked for 2021.

Tucked in darkness, around the back of the Arena is the athletics track, which I actually once crossed the finish line of after completing the Bolton 5k. Having asthma and arthritis, my body felt like it was going to pack in last time I was travelling down this path. Tonight though, it was calm.

Inside the track is the football pitch on which tonight’s match was being contested. Usually, this is now the home ground of Park United who play in Division 1 of the Lancashire Sunday League but I was happy to be watching two Saturday teams playing… it somehow made it feel like more of a tick.

As I walked across the running track, towards the uncovered stand which sits next to the finish line, I saw a group of spectators and immediately recognised the culprits. Tony and Sid had paired up, with Tony’s car out of action (it was later condemned) after a tough week groundhopping around Devon and Cornwall, while Gary – who is on the committee at Runcorn Town – had also come along, sporting his woolly hat which made me feel a little bit colder as I stood there in my shorts. I reckoned I’d get another week out of them before they’d be swapped for jeans for the remainder of the season.

Behind us, groups of the Bolton United players had found a space by the long-jump sand pit. They took it in turns to conduct their prayers just before kick off. It was nice that they felt comfortable praying next to the pitch while others around, who weren’t of the same religion, stood elsewhere and respected their privacy. Would they be able to do this as confidently if they played for a NWCFL or Northern Premier League side? Possibly not.

Stoneclough – from the other side of Bolton – were the visitors tonight and it appeared to be a reserve side, with the likes of Mark Truffas and Glenn Matthews who had played for Atherton Collieries not at the match. Darren Handley, a local Football League referee who normally takes charges of League 1 & League 2 matches was in charge, going for the casual look as he jogged about in a fleece. It was in stark contrast to the night before, when he had officiated Colls v Chorley, with his team of officials communicating through digital headsets and those posh offside flags that buzzed.

Bolton took the lead, deservedly so, on 19 minutes when a low cross from the left was tucked away at the back post. They continued to play impressive football, with a great deal of skill and tenacity, deservedly doubling their lead a minute before half-time through a rebounded effort from close range.

Half-time lasted only a matter of minutes, which suited everybody. A bitterly cold wind was now beginning to whip through the athletics arena, with the most tempestuous area of the ground being where the uncovered seating stand actually was. Hence why it was vacant. The blue seats, which appeared to be the same as those at The Etihad and the Regional Athletics Arena, were in the firing line.

The second half failed to live up to the excitement of its predecessor and as such, the scoreline finished 2-0 to Bolton United. By the end of the friendly, the crowd had been bolstered to a staggering 21, with the majority of us watching because we’d seen the late call to arms on Twitter a few hours ago.

As another TransPennine train rattled at great speed through Horwich Parkway train station, which sits just behind the stand, we walked back towards the Arena and headed home. It had been a nice bonus match to squeeze in, with matches becoming fewer in availability. 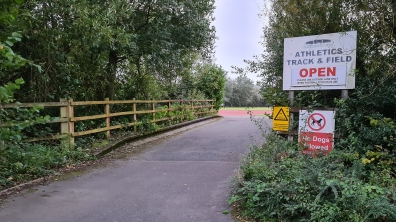 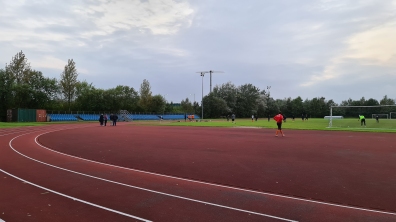 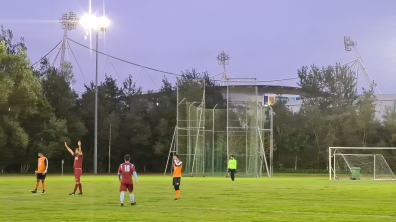 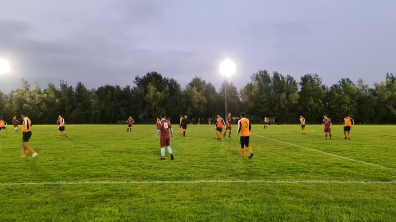 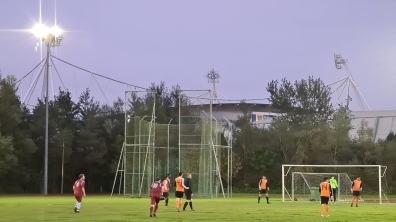 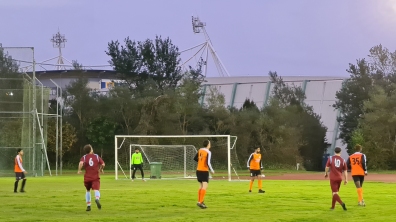 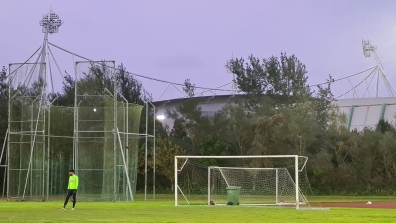 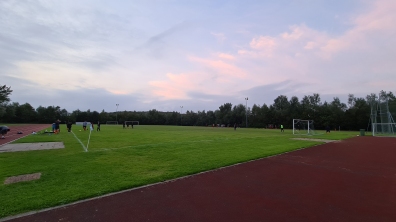 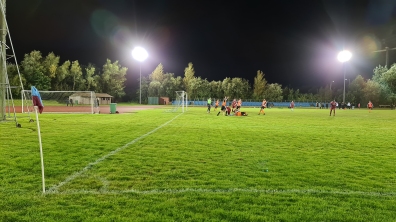 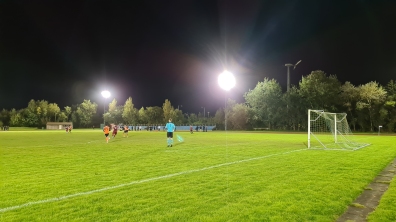 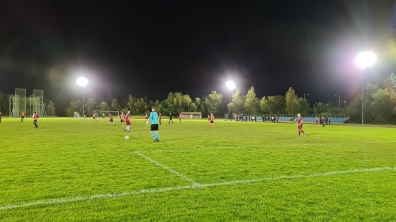 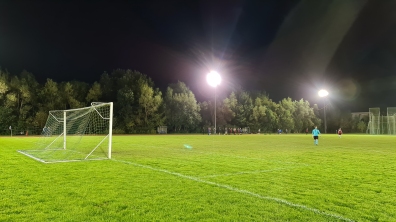 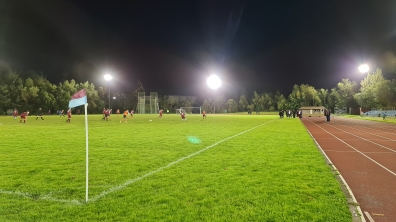