A woman came stomping out of the clubhouse at Sycamore Road, home to Manchester Premier Division side Walshaw Sports. I think she was the tea lady. “Are you taking photos of my van?” she asked in an accusatory manner. As you know, in order to create the image gallery that follows the writing on these posts, I like to take a collection of photographs which show the ground and it’s surroundings.

No, I wasn’t taking photographs of your van. Your van hadn’t even drawn my attention. If you park in front of the entrance of a football ground, in all likelihood, your van will end up on social media. For the purposes of this post, any photo that does contain a sight of this woman’s van – such as the image below – has been ‘altered’ slightly, as to hide it from the public forum. After assuring her I wasn’t an employee of the DVLA, I carried on around the corner and found the match about to kick-off on the other side of the cricket pitch.

Walshaw finished the curtailed 2019/20 season third bottom of the Manchester League top division but they did have a large number of matches in hand over other clubs. Over the summer, like most sides, they’ve added some new players and looked very competitive against Chadderton who play one division higher in the NWCFL Division One North. One of their new players is former Atherton Collieries winger Matty Boland, who put in a good shift for his latest club.

The previous evening I had actually been just down the road at Elton Vale, watching them host Stoneclough. So, for the second night in a row it was a crawl through Bolton to reach the hilly north western suburbs of Bury. Walshaw sits two miles away from the town centre. Walshaw village’s Wikipedia page consists of just shy of 60 words, meaning even after my visit there, I’m unable to tell you anything about the place.

At the bottom of Sycamore Road, which sits nestled in a large housing estate, is a sprawling sports club which is home to both the villages cricket and football clubs. They merged together in 1965 and went about improving the infrastructure on the site.With each improvement, they made the most of it and invited somebody famous down to open it. Properly milking it in the process.

Not wanting to miss out, Emlyn Hughes opened the Members Lounge in 1973. Bolton Wanderers hero Nat Lofthouse even opened ‘the extension’ in 1977. An honour that he surely didn’t forget in a hurry. Since then, Tommy Walsh, from BBC hit show Ground Force has opened a new patio and the club hit international headlines when Nelson Mandela proudly served the first portion of chips using the club’s brand new fryer.

I didn’t venture into the clubhouse on this occasion. It’s just as well that I didn’t as one of my mates who was in there informed me that I was a topic of conversation, relating to the van incident moments earlier. It all reminded me of the time I was at Skelmersdale United’s old ground, when I was asked to stop taking photographs as it “encouraged groundhoppers to break into the ground and steal things.” It dawned on me that the bloke clearly thought groundhoppers were a group of people who physically ‘hopped’ over the fence to ransack the place.

Anyway, I’m waffling now. The match started eight minutes before the advertised 18:45 kick-off time. It was probably for the best, as we were now approaching the end of August and light was starting to disappear earlier with each match that we went to.

Roughly, there were probably around 100 watching the match, with many drinking pints next to the pitch, which made for a ‘raucous’ atmosphere compared to all the other matches I’d watched ‘behind closed doors’ in the past couple of weeks. Each fancy turn, meg of the opposition or a shot at goal was greeted with whooping and sarcastic screaming from the excitable groups of lads congregating along both sidelines. It made for an enjoyable atmosphere.

I was stood with Tony, Graeme and Barrow AFC director Sid, who is always great to chat to when you bump into him at matches. He was having a welcome break away from a hectic few months at Holker Street, where the Bluebirds had finally reached the Football League after dropping out way back in 1972. Despite losing their promotion winning manager, Ian Evatt, to Bolton Wanderers (which we had a laugh about) he was really looking forward to the new campaign with season ticket sales breaking all previous records.

With his thick, Cuban cigar in hand, he remained in situ close to the corner flag for the entirety of the match. It looked, from the far side, like he was setting off a flare with the cloud of smoke that surrounded him. It was a treacherous walk around the rest of the pitch, which was in stark contrast to the resplendent playing surface which formed part of the cricket outfield.

The home side took the lead on 11 minutes, when Matty Boland lined up a free-kick and hit it past the Chadderton goalkeeper. Looking like it was in, it bounced off the left-hand post, glanced across the face of goal and was hammered in by Dylan MacMahon. A bloke, who I assumed was his Dad, was very happy.

Further up the touchline was retired referee, John. A regular at games in and around Bolton, he never misses a trip out of the house. “You can’t count this match Joe! It’s not legal, there’s no corner flags!” he always notices things like this. Of course, he was only joking and I would be counting the match. “I’ve not been here since 1974 when I refereed a Lancashire Amateur League game.” The fact he hadn’t been back since perhaps spoke volumes. Maybe he’d been accused of taking photographs of somebodies van?

The pitch at Walshaw slopes from one end to the other, much like the two in Atherton. It’s almost like all of this side of Greater Manchester slops from north to south. Down at the bottom end, Chadderton pulled a goal back on the half hour mark through former Wolverhampton Wanderers youth player Dylan Stringer-Moth, or Dylan Moth, as he appears to have been rebranded ahead of the new season.

Six minutes later and Walshaw had regained their lead when MacMahon somehow managed to whip the ball across the goal with an outswinging shot, that bounced in off the far post. If their ‘bench’ had celebrated the opening goal passionately, this one was greeted even overtly. It didn’t last long, with Chaddy equalising once again soon after.

Half-time arrived and it lasted a matter of minutes, the referee clearly keen to get back home as quickly as he could. This was further proven when moments into the second half a Walshaw player went down with a serious injury in the Chadderton penalty area. The stoppage lasted around ten minutes, yet no time was added on at the end. Stricken, the player sat behind the goal for the rest of the game and watched on as his side went on to win.

And what a goal it was to win it. Venancio Da Silva was in the right place at the right time, connecting with a cross from the left with a perfectly timed over-head kick. The Walshaw players immediately ran off the pitch to their injured teammate and hugged him as a celebration. I certainly hoped that the injury wasn’t as bad as it seemed. 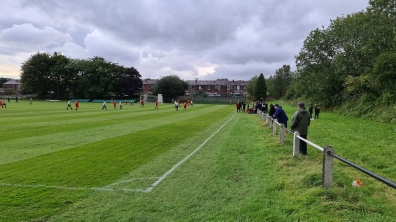 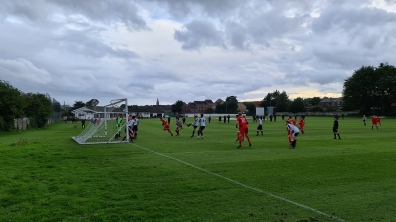 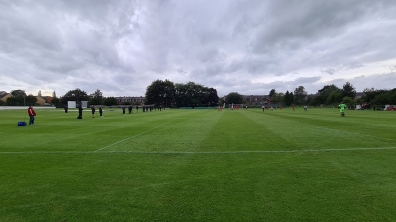 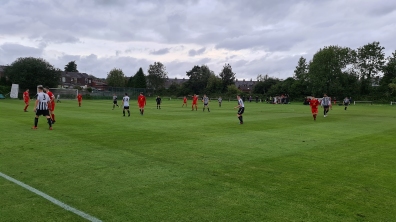 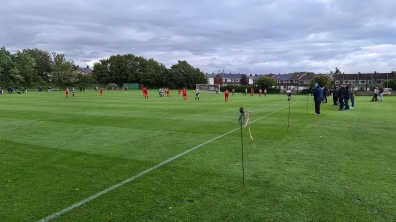 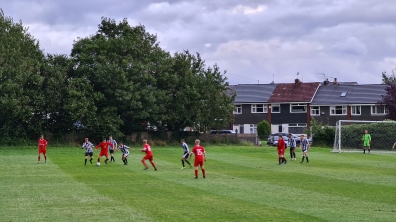 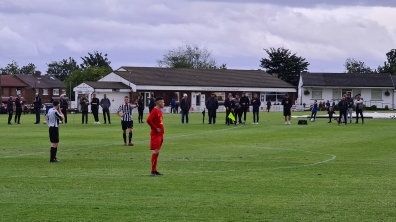 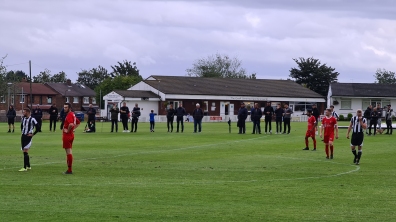