To describe the current position of football as an ‘uncertain mess’ would be an understatement. The coronavirus pandemic doesn’t seem to be vanishing anytime soon and even when it does, the sport we love probably won’t return all that quickly. Swathes of clubs are waiting anxiously as they await for final decisions on their 2019/20 campaigns.

For some ludicrous reason, which nobody will ever be able to explain, there has been no continuity when making such important decisions. While some leagues have already been null and voided, others are trying their best to press on. This calls into question the entire point of having a football pyramid.

Anyway, a club who will be hoping the next season arrives sooner rather than later are Eyemouth United, who will be returning to action after a season long break. Their decision to have a year off to rebuild the club came after a torrid 2018/19 season where the Fishermen, as they are known, finished the season on -3 points after losing all 24 of their league matches, fielding an ineligible player and conceding a whopping 163 goals in the process.

When Paul and I made the trip to Warner Park – an idyllic venue close to the North Sea – there were no signs of the dark days that were to follow. It was all a far cry from arguably their proudest moment when back in 1953 when they hosted Celtic in the Scottish Cup. It was a Bhoys side that included Jock Stein and it was played in front of over 5,000 spectators.

Back then, the club played at Gunsgreen Park, which is a large, empty field found just over the entrance road from the current ground which is named after former chairman of the club Alf Warner. The newer pitch, which was originally a farmers field, is a bit more sheltered from the harsh elements that the local weather regularly whips up.

It is said by many locals that in high winds it used to be impossible to play on the old pitch which was higher up and therefore more exposed to the North Sea. Several games were abandoned due to bad weather and goalkeepers were unable to kick the ball out of their own area. Apparently, the club even once featured on the news when a game was abandoned when all of the footballs brought by both teams were lost over the cliffs on the other side of the golf course.

Quite a setting; it would have been some sight when Celtic marched into town. I managed to track down, quite easily, the national newspaper report from that day and it was written that, “Ten minutes before kick off more than 30 green and white scarved Celtic supporters broke into the tiny stand. They pushed aside the stewards and forced their way into vacant seats. Police were called but the Celtic supporters stayed put.”

There would be no such problems at this match which formed part of the annual Scottish groundhop. Not only because there was no stand to break into but because it was organised by non-league dictators Laurence and Chris, who take no nonsense. Rumour has it, the North Korean regime take great inspiration from what their observers record on these football weekends. A recent introduction to military parades in Pyongyang has seen Kim Jong-Un himself using a clicker to count the number of attendees before relaying the information through state television.

Having done some research on various forums before the weekend, there was some controversy brewing as groundhoppers argued among themselves, as usual. The main topic of conversation was how many people would be veering off the ‘official itinerary’ and sneaking off to do their own game at some point during the day in order to collect an elusive tick. One member, clearly more experienced than me, explained there is an actual technical term for this practice in the hopping fraternity called “leakage”.

Thankfully, there appeared to be little leakage occuring in the harbour town of Eyemouth for this 11:00 kick off on a sunny Saturday morning. In total 227 enthusiasts watched an entertaining encounter. Visitors for the afternoon were the peculiarly named Lothian Thistle Hutchison Vale FC.

Running out 3-0 victors on this occasion, they would go on to win the league title losing just once all campaign. Thistle – who hail from Edinburgh – were recently labelled the “most fruitful academy team in Scotland” having produced a whole host of professional footballers including Darren Fletcher, Leigh Griffiths, Kenny Miller and the brothers Gary and Steven Caldwell. 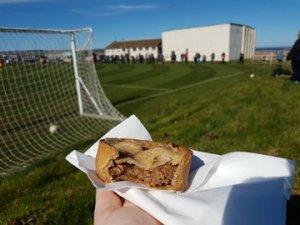 Despite the lack of facilities and infrastructure at Warner Park, it is definitely one of my favourite grounds that I have visited. I don’t know whether this was due to the quirkiness of a squash court being used as the clubhouse, or the stunning views that could be taken in if you scaled the hill up to the neighbouring golf course. It could even have been down to the luxury of being able to sit down on the grass banking behind the goal, basking in the sunshine while eating a steak and haggis pie.

In hindsight, three years on, I think it was probably this match that broadened my horizons when it came to watching lower league matches in Scotland. Up until this point, I had always concentrated my time on watching matches south of the border in England. And if I did dare to venture over the border, why would I go all the way up to Scotland to watch an amateur match? The entertainment and just how much you felt a part of the action at Eyemouth was just superb.

After the match, the large gaggle of hoppers raced over to the town of Coldstream for the next match, while we stayed behind. Kick off wasn’t for a while and we got the sense that the town of Eyemouth could be quite a nice one if we made the effort to venture into it.

Carefully we traversed down a steep bank and made our way to the harbour area which was awash with fishing boats and yachts. There seemed to be remnants of industry still operating here. To our right hand side was the impressive Gunsgreen House which according to visitscotland.com is a building which was at the centre of the town’s previous dealings in the illicit trade of wine, spirits, tea and tobacco.

Presumably the squash court was also smuggled into the town this way and stashed in the nearest available field.

The town centre itself sits on the other side of the harbour from the football ground. It flourished in the 19th Century, thanks to an abundance of haddock and herring being available. Due to the size of the harbour, it took a little while to stroll around but we certainly weren’t complaining. Eventually we stumbled across a restaurant called OBLO on Harbour Road, which while appearing quite posh for the likes of Paul and I, served beer and also had a sun terrace which we took full advantage of given the weather.

Little did we know that OBLO were actually the sponsors of the football club. Quite how we missed this detail I will never know as I have since been in touch with the Guinness Book of World Records and Eyemouth United have indeed been awarded the ‘Largest sponsor on a maroon football shirt’ award.

Custom soon ramped up as we found ourselves joined by many of the football clubs members. Logistically, it was a perfect partnership as it meant that the players could head here for some post match food and a few pints, rather than sitting on the floor in a squash court. Of course, many professional footballers have been known to pick up innocuous injuries while lounging about on a squash court floor including Kieron Dyer and Dean Ashton.

Despite pints of Tennent’s flowing, we weren’t staying for much longer. Our day of excitement had only just started, with Coldstream v Tynecastle the next stop before finishing the adventure with the evening kick off of Hawick Royal Albert v East Stirlingshire. It was going to be a tiring day but if our next two grounds were like Warner Park, we were in for a treat.

As for Eyemouth United, as I alluded to earlier on, they were accepted as non-playing members of the East of Scotland league last season and have announced that they are ready to return to playing once again. They have a new manager and he is confident he is able to build a squad that can be competitive once again. Rather them than me; I think I would turn the same shade of maroon as the clubs shirts if I had to play football there in the depths of winter. 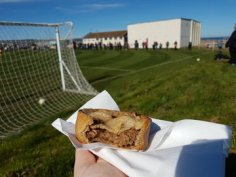 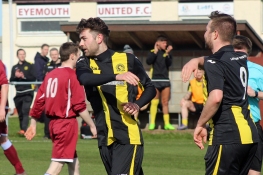 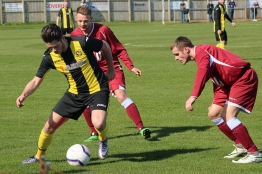 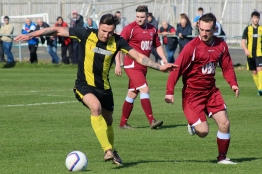 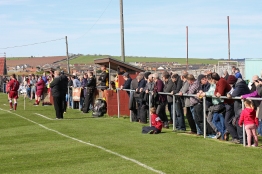 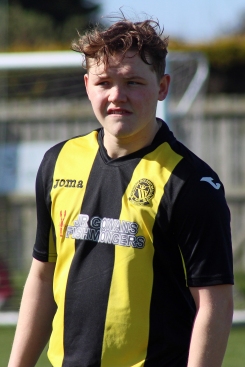 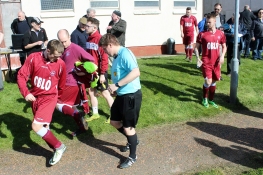 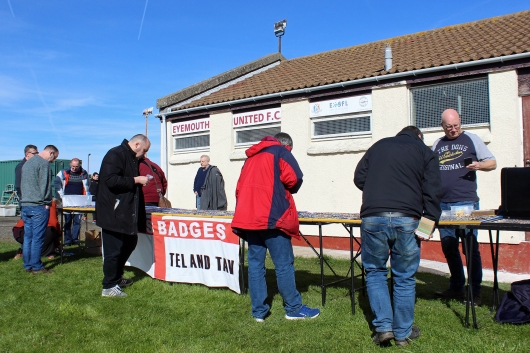 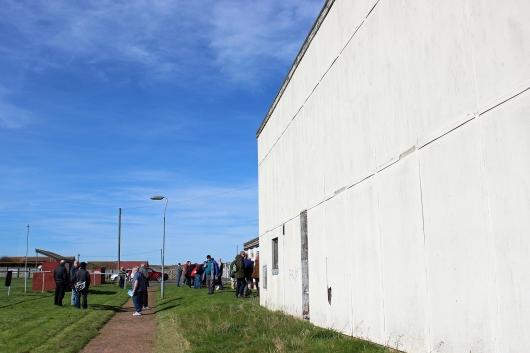 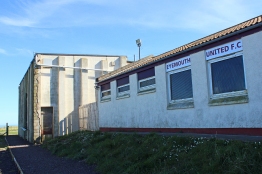 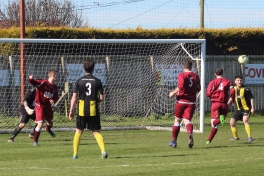 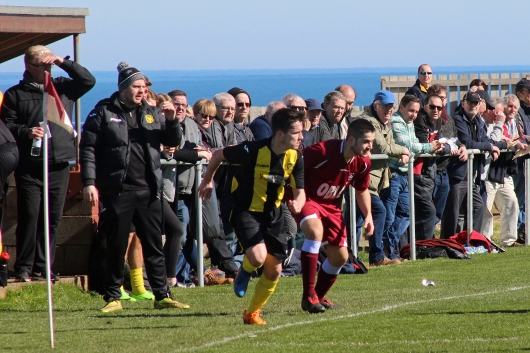 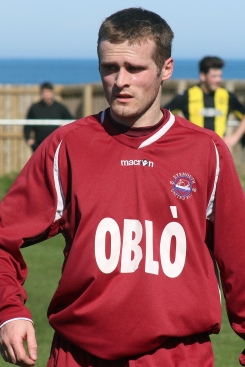 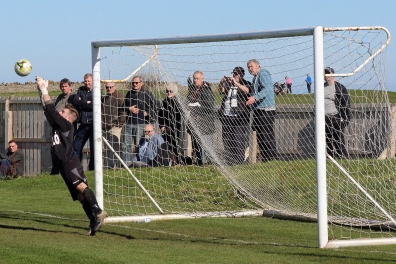