I had agreed with fellow blogger Nick that I would go to Dagenham v Cheltenham with him. However, plans quickly changed when Barnet announced that they would be moving from Underhill at the end of the season. Barnet v Shrewsbury Town it was!

Me and my Mum travelled down from a rainsoaked Manchester at around 10:00 on the morning of the match, arriving at Euston just before midday. We then quickly dashed to our base for the weekend; Travelodge Waterloo. 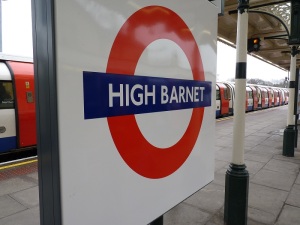 After a quick brew it was time for me to venture to the very end of the Northern line. My favourite of all Underground lines for obvious reasons. First though I had to top up my Oyster Card. Yes, that’s right. You don’t have to be Southern to own an Oyster Card you know!

The trip to High Barnet took around 45 minutes, so I shoved my iPod on shuffle and relaxed a bit. Rather ironically as I was sat at Camden Town tube station my iPod chose to play a song by The King Blues which goes like this… ♫ From the fiery pits of Camden Town, to Elephant & Castle Underground ♫ – It was quite spooky! 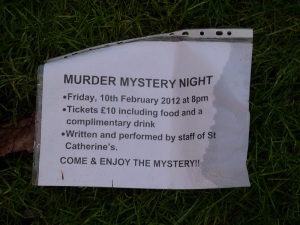 The tube train soon emerged from the underground system and it shocked me just how green the outer parts of London are! There were allotments everywhere… and they even had trees! I could tell I was going to enjoy myself. It’s just aswell they have fields and parks in Barnet, where else could they dispose of all the bodies? Yes, I discovered that the people of Barnet infact like to participate in events called ‘Murder Mystery Night’. Unfortunately after looking at the advertisement closer I realised I had missed the event!

The walk from High Barnet Station to Underhill took around 5 minutes, and it was easily found by signposts… and more importantly the fact you can see it off the top of Barnet Hill! I crossed the road and ran down the hill which turned out to be very enjoyable, even with my dodgy hips and back.

Suddenly it started raining. You know, that fine rain that soaks you through? It seems to be a recurring theme these days – everytime I tick off another ground it rains. I arrived at the ground and I didn’t really have a clue where I was going and I ended up venturing across the cricket pitch at the rear of the South Family Stand. 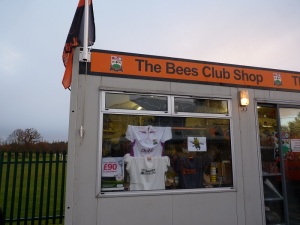 After taking some photos it was time to search for the important things; matchday programmes, a visit to the club shop and find an unsuspecting victim who I would force to take my photo. I eventually found a programme seller next to the turnstiles for the North Terrace. He was sat down behind a desk which was called the ‘Village Shop’ – How cute! The old bloke even had the cheek to slag off my Wigan Warriors top…

Now it was time to find somebody to take my photo outside. After asking one chap who didn’t understand what I was asking him – I found another old bloke who reluctantly helped me. A friendly steward then called me over to see where my ticket was for, he showed me which turnstile it was and I went to enter fortress Underhill. As I approached the turnstile I was informed that it was the wrong one, and that my entrance was on the other side of the stadium. Such jokers! The steward then explained to me that he thought I was a Shrewsbury fan. Yes, Wigan obviously means Shrewsbury in Barnet language.

After much deliberating I was sent around the other side of the stadium where I was greeted by another two stewards.

“You’ve got a nerve coming into this stand with that top on! These lot will love it!”

I thanked the steward for his vote of confidence before we then Googled what colour Shrewsburys away shirt is. Turns out it was red… Very similar to my Wigan shirt – according to him.

For this match I had chosen to stand in the East Terrace. I was the first one on the terracing and I couldn’t decide where to stand! Did I stand leaning on a bar, and ris 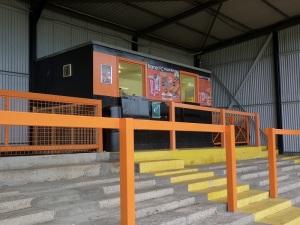 k getting wet? Or did I stand on the fence at the back and risk not being able to see the game?

All this decision making resulted in me needing some food. I wasn’t tempted by the Pukka Pie on offer, not fit for a trained pie pro like myself. Instead I opted for the Southern option; a cheeseburger. The ‘Snack Bar’ was found in the top right hand corner of the terracing, and was ran by two babyfaced assistants.

“Is this the mustard?” I asked, pointing at a transparent yellow coloured bottle.

“If it says Mustard on it then it’s mustard.” replied the smug lad who was incapable of serving cheeseburgers.

He then realised the mustard was not labelled, and he shuffled off looking rather embarassed. I also had a ketchup problem… BUT THIS IS A GROUNDHOPPING WEBSITE! NOT GORDON RAMSEYS KITCHEN NIGHTMARES!

In December Barnet FC announced that they would be moving away from their home of 104 years at the end of the season. This is due to a fallout with the local council. The lease of the cricket club which provides access to the Southern End of the stadium expires in December 2012. In short, the council wants to charge Barnet FC a far higher rate than they do currently. So in essence, Barnet council are pricing this great family orientated club out of the area.

I can safely say that Underhill is one of my favourite grounds to date… Despite having seven seperately named stands!

To my left was the South Stand. Built in 2008 it offers covered seating for 1,038 home supporters. You can purchase a family ticket for this stand *2 adults and 2 children* for just £30!

To my right was the North Terrace. Situated behind the goal it is uncovered and backs on the a residential area. Also found on the North side of the ground is the North East Family Stand, which offers a seated option for away fans. It looks more like a marquee than a stand.

Directly opposite were a further 3 stands. The Main Stand was built in 1964 and it holds 782 home supporters. The stand is also used to house players and press facilities.

Found next to The Main Stand is the Family Stand. This hold 237 seated home supporters.

On the other side of The Main Stand is the North West Terrace. Much like the North Terrace it has room for 536 home supporters.

If you’re not confused after that… Then congratulations!

The match itself was a physical affair in which both teams had prolongued periods of pressure. It was a game of two halves, and I suspect the famous sloping pitch had something to do with that. 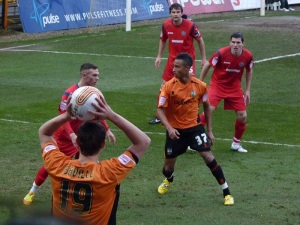 It was the visitors that made a bright start and they were unlucky not be in front after 10 minutes after having numerous attempts at goal. The Underhill crowd were getting frustrated and it wasn’t long until  the home side came into the match themselves.

Jordan Obita; who joined on loan from Reading in January had too much skill and pace for the Shrewsbury defence and he enjoyed an unchallenged reign down the left handside. Unfortunately, League 2 top goalscorer Izale McLeod was unable to meet any of the superb crosses. 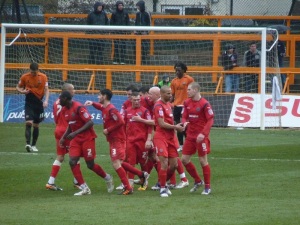 Sean McAllistar was fouled on the edge of the box, and Matt Richards took the resulting free-kick. The ball took a cruel deflection off Clovis Kamdjo and Barnet keeper Dean Brill was helpless to see the net rippled behind him. 1-0 to Shrewsbury after 45 minutes totally against the run of play.

As the teams went in for half time the weather took a turn for the worst. Torrential rain pounded the metal cladding of the East Terrace, the pitch began to flood, and it wasn’t long before the referee decided a pitch inspection was needed!

I decided to have a flick through my matchday programme, when suddenly I found one of the strangest adverts I have ever read. Despite it being strange, it didn’t come as a shock as it went hand in hand with the advertisement I found walking to the ground. A full page spread advertising ‘Official Suppliers of Barnet FC Coffins and Caskets’ confirmed my suspicions of the people of Barnet being death obsessives. 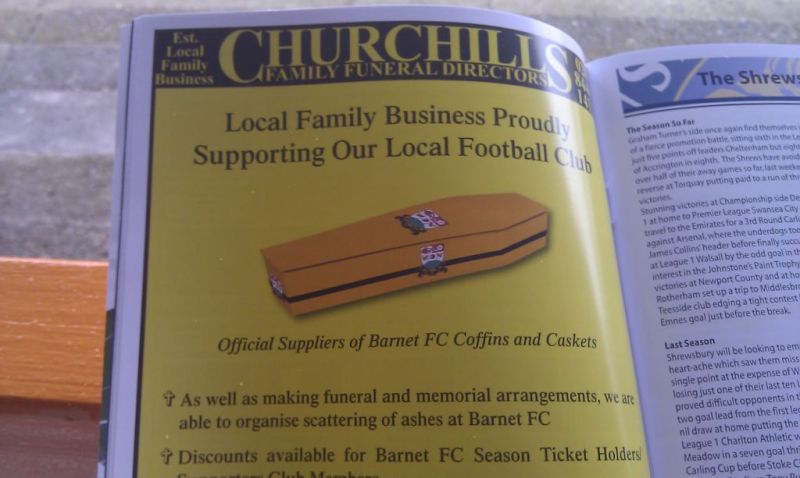 So after that entertaining read the pitch passed inspection and the second half went ahead.

Barnet came straight out of the traps and they were rewarded with an equaliser. Jordan Obita crossed the ball in to find Ricky Holmes. Holmes got the ball under control before then passing to Izale McLeod. McLeod beat the defenders before passing calmly past Chris Neal in the Shrews net.

When the man next to me realised I seemed more interested in the FA Cup scores on my mobile he asked me what the scores were. Just from hearing me reading out the scores he went –

“You’re from Bolton aren’t you!”

I was very impressed! And even more impressed with the fact Bolton were beating Millwall away from home!

The home faithful felt they could go on and win the match, however the ensuing performance resulted in Barnet manager Lawrie Sanchez apologising for the second half performance. Shrewsbury were passing the ball around fantastically and Barnet looked disheartened. 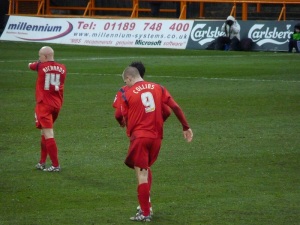 Shrewsbury took a well deserved lead on 75 minutes when Jermaine Grandison curled the ball into the path of striker James Collins. Collins got a light touch on the cross to take it past a helpless Dean Brill.

The away team then saw out the remainder of the match by playing keep ball; much to the anger of many of the home supporters. Shrewsbury even resorted to keeping the ball in the corner! There was one very irate fan near me who began shouting –

The match ended and it was time to catch the Northern Line back to Waterloo.

I thoroughly enjoyed my trip to Underhill, it is one of my favourite grounds so far. Yes, parts of it are falling to pieces. Yes, it may not be adequate for modern day football – But at the end of the day it is one of the remaining romantic grounds left in the country. Shame on you Barnet Council!

You can also read an interview by Barnet fan Lucy, here: ‘Two Minutes With’ feature – Where this week she interviews me! – http://lookblacknamber.blogspot.com/2012/02/two-minutes-with-the-92-special.html