Ask any Bury fan – This match was the one which they looked for as soon as the fixture list came out, along with the obvious rivalries of Rochdale and Oldham. Not only had Bury lost their manager Alan Knill to Scunthorpe in March, but they also now had a couple of ex Bury favourites in their ranks in Damian Mozika and Nicky Ajose.

Alan Knill had taken Bury from near relegation to the brink of promotion when he suddenly left to join Championship strugglers Scunthorpe United.

As it was, Richie Barker guided Bury to promotion. Alan Knill guided Scunthorpe to relegation.

I was unsure as to the kind of reception awaited for Knill. I expected it to be a mixed bag of fans who hated him for leaving, and fans who loved him for saving the club… However, I was wrong.

We set off from an overcast Atherton at 11:00 on the dot, and picked Danny’s Grandad up along the way. The car was quite full for this exciting adventure to North Lincolnshire as Will had joined us.

Now, something quite miraculous happened during this journey. As we travelled towards Leeds the sun came out. It always seems to be grey and miserable in Lancashire whenever I go on away trips!

Arriving in Scunthorpe at around 13:00 we parked outside a couple of offices next to the KFC on the retail park. Costing only £2 it was fantastic! Also, you could drive straight back on to the main road – ensuring a speedy departure after the match. 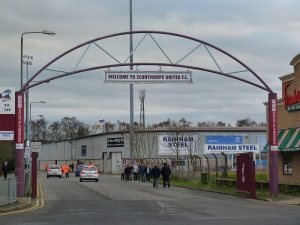 Glanford Park is situated on a retail park. The retail park has your everyday necessities such as B&Q, Tesco Extra, Frankie & Bennies, McDonalds and KFC. We couldn’t decide where to go for lunch… But then I had a brainwave. Last time we had a KFC on a Bury away trip they were promoted.

Sorted. KFC it was.

Whilst in KFC we encountered a cleaner who fancied himself as the owner of ‘Scunthorpe Ink’* and a couple of men who sat in the corner of the outlet looking like they wanted to mug us. How daft must they have been? We were dressed as Primark Tigers! We’d have ripped them to pieces!

*For those of you who don’t know what I am on about, Miami Ink is a famous tattoo parlour in Miami which also has its own TV programme. There is also a Wigan Ink – However this is a pie shop NOT a tattoo parlour.

With around an hour to go until kick-off we took the short walk to the ground.

As I was about to have my usual photo outside, we were verbally attacked by some idiot. Here is a photo of the scene to help you picture the argument;

We shall call the culprit Mr. Iron. 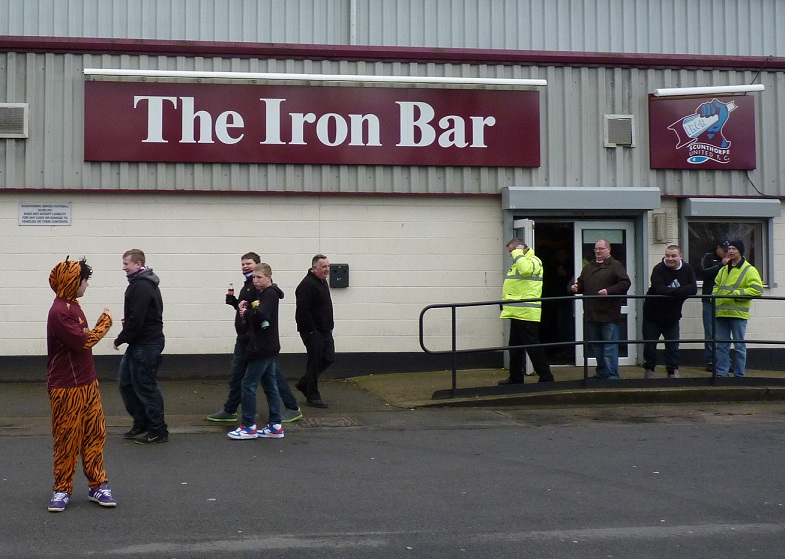 As you can, see Mr. Iron has a way of words. He then proceeded to give us a Geography lesson:

Gary – “We’re not from Manchester, we’re from Lancashire!”

This continued until we realised we had confused Mr. Iron, at which point we walked off singing ♫ Manchester La-La-La! ♫

I then attempted to have my photo outside another entrance. This time there were two men outside who refused to move, resulting in them ending up on the photo. I wasn’t happy! Wow, we’d only walked around two stands and nothing was going right so far…

Next up was the club shop. I purchased my ‘multi-award winning programme’ for £3, and a 50-50 ticket for the price of… have a guess? 50p! I then joined Danny, Gary and Will in the club shop. It is only a small space, so I walked through the doors and shouted “Hello my fellow Mancunians!” – The Bury fans who had witnessed the wrath of Mr. Iron were fairly amused.

Now, the next stage of the walk around Glanford Park was amazing. There it was. Right in front of me! THE SIR IAN BOTHAM EXECUTIVE LOUNGE! Fantastic.

We finally reached the away turnstiles, and as is always the case when I am with Gary – the stewards kicked off.

“You are not allowed to use that camera to take photos of the players in motion.”   Now, I have had this pathetic and quite ridiculous rule dictated to me in many ways. However, the ’players in motion’ bit did make me laugh. How pedantic do stewards want to be? From this small encounter with one of my fluorescent friends I concluded that the stewards at Scunthorpe are idiotic… and I wasn’t wrong.

Scunthorpe United had obviously under-estimated how many Bury fans would be making the trip. They had taped off the two outer sections of the stand, ensuring that we were all unable to move seats. Now you may be wondering why I wanted to move seats… WELL! Have a look at this…

Now I don’t know about you, but I can’t see the goal which is conveniently hidden behind that post.

More and more Shakers turned up, and suddenly my Senior Fluorescent Friend was faced with a dilemma. Does he go against all of his beliefs and open the taped up area of the stand? Or does he simply ignore the issue of overcrowding and continue to walk around aimlessly?

Bury fans had brought a few banners. Lewis had a banner which read ‘YOU CAN’T BUY US KNILL’ – This was obviously referring to the fact Knill would have bought ALL of the Bury squad when he arrived in Scunthorpe. Guess who asked them to take the banner down? Guess who confiscated their air-horn? The Senior Fluorescent Steward, now with his Floors2Go companion.

The Bury fans had now pretty much filled the AMS Stand which holds just over 1,600. Well, it holds 1,600 when sections aren’t taped off.

To my right was the Grove Wharf Stand.

To the left, the Scunthorpe Telegraph Stand which is the main stand at Glanford Park. It houses executive boxes, players facilities and it is the designated ‘family stand’.

Directly in front was the Rainham Steel Stand. It is more commonly known as the ‘Doncaster Road End’ among supporters. This stand is the only terraced stand at Glanford Park. The Football League have informed Scunthorpe that if they gain promotion into The Championship again, then they will have to make this stand all seated. It was a shame that the supporters who occupy this stand refused to sing as it has the makings of a brilliant singing section.

Even if the Scunthorpe fans had found their voices, they’d have had nothing on the 935 travelling Shakers who sang throughout. 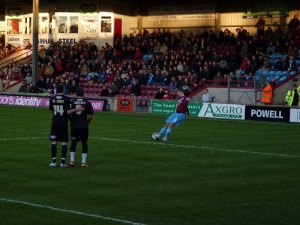 The match started and Scunthorpe found themselves in front after just 5 minutes. Efe Sodje fouled Bobby Grant on the right hand touchline and The Iron scored from the resulting free kick. Shane Duffy’s cross was left by everybody and the ball crept past a statuesque Cameron Belford in the Bury goal.

Scunthorpe nearly doubled their lead a few minutes later when Bury failed to deal with a corner. Michael O’Connor headed towards goal and Cameron Belford somehow kept it out before it was then cleared.

More unanswered Scunthorpe pressure resulted in a tussle between Belford and Irons striker Jordan Robertson. After Belford had saved Robertson’s shot, the striker followed through on the Bury keeper resulting in a heated exchange between the two players.

Andy Barcham was proving to be a thorn in the Bury defence, and he himself nearly scored. He carried the ball inside before firing towards goal. A combination of Phil Pickens head and the crossbar kept the score at 1-0.

Scunthorpe had yet another chance and they were unlucky not to add to their lead when Barchams shot was scrambled off the line by Bury defender Ashley Eastham.

Half time. Scunthorpe United 1-0 Bury. It was now time for the first of Gibbo’s FANTASTIC predictions.

Danny and Will were having none of it. So off we went to have a walk around the away end. The concourse was very poor, and we abandoned attempts to get on to it as it was overcrowded.

For the second half we had moved to the top right hand corner. This meant that we had around 200 seats to ourselves and we were allowed to stand up, like every away fan should be able to!

The second half kicked off, and it was a carbon copy of the first. However, this time it was Bury who scored after 5 minutes. Steven Schumacher passed the ball to the edge of the area and Peter Sweeney was there to drill it into the bottom corner first time. It was a “move straight from the training ground” and it sent the Bury faithful crazy. Fans were running EVERYWHERE! and our fluorescent friends were outnumbered and defenceless.

Bury then took the lead on 69 minutes when Andy Bishop finished a Michael Jones cross. Now, our tiger suits had also given us the art of seeing in to the future. As Jones was running down the wing, our tiger instincts informed us that Bury would score. We ran down the steps and began to run towards the net… GOAL! Danny slipped, and I carried on towards where the players were celebrating. I don’t even know where Will ended up.

Whilst travelling back to my seat, I was pushed by a female fluorescent who looked a bit like Heather off Eastenders.

“Get back! Get back to your seat!

Slightly bemused at Heathers actions. I pushed her back and told her I was going back to my seat. Quite why she grabbed me I will never know. Perhaps it’s because I am a small, helpless teenage boy. I doubt she’d have grabbed a drunken 28 year old man.

“Bury will score here! They will! Lets go down there so we’re ready to celebrate!”

Sweeney clipped the ball into the box where it was met by Liverpool loanee David Amoo. Amoo’s shot slammed off the crossbar, and veteran defender Efe Sodje was there to head the ball home.

We ran across the bottom of the stand to celebrate with the players. We have even made it on a few of the official Bury matchday photos.

The match was drawing to an end, and Bury fans broke out in a chorus of ♫ Stand up! And fold your arms! ♫ – This song was directed at Alan Knill and his iconic stance.

I really enjoyed my day out in Scunthorpe.

I know this is may be an unpopular opinion, but I actually like Glanford Park. It’s easy on the eye, and I love it when a stadiums stands are the same height all the way around. The spectators are very close to the field of play, and this adds to the matchday experience.

I would also like to congratulate my fluorescent friends who made my experience a safe one.

The day after the match Bury FC published a statement in which they slammed supporters for their treatment of Alan Knill.

Since publishing this post ‘the_ref’ has helped me find a photo of Alan Knill with his arms folded:

Here are some snaps from Burys Official Facebook Page –

See if you can spot the Primark Tigers!