Follow the natural land border of the River Tweed inland from Berwick and you will arrive in Coldstream. This quiet Scottish town is most famous for lending it’s name to the oldest regiment in the British Army; the Coldstream Guards.

The regiment marched from the border town down to London in 1660, an action that resulted in the restoration of Charles II. These days, as well as being infantry soldiers, the Guards have a ceremonial role as protectors of the royal palaces, including Windsor Castle and Buckingham Palace. These are the soldiers you often see dressed in red sporting a bearskin hat.

This quiet town sits on the north bank of Tweed and has a population of less than 2,000. Nothing much appears to happen. A browse through the online offerings of the local newspaper highlights a bin fire and damage to a bench as recent top news stories.

You would have thought by having such a small, close-knit community the town’s football club wouldn’t have to deal with bad behaviour or crowd disturbances. Then again, I suppose it depends what you class as bad behaviour.

Albion Rovers, for instance, who are based in Coatbridge on the outskirts of Glasgow will probably have a more ‘laissez–faire’ attitude towards what is shouted from the crowd compared to Coldstream.

It was back in 2011, when the Streamers – as they are known – made it into the news when they went public with their plea to supporters to stop swearing.

A spokesman from the club claimed that, “the level of foul language being used during its games had sparked a series of complaints from local residents,” which seems a bit of a trivial complaint when you decide to buy a house next to a football pitch. Anybody found swearing at their matches faced being issued with a banning order or if they were lucky they would get away having received a ‘stern letter’.

Home Park isn’t necessarily in a heavily residential area but the ground does sit above a lot of the town, allowing the voices of players and supporters to carry through the local vicinity. But surely that comes with buying a house next to a football ground? For a couple of hours every other weekend, you may hear a bit more shouting that you normally would on a normal day in Scotland.

So incensed were some locals that one neighbour even offered to donate £1,000 to the club if they were able to stamp out the problem.

I can only imagine the chaos that ensued on the local residents Facebook group when over 250 groundhoppers turned up to watch this league match against Tynecastle. If that wasn’t bad enough, the club had even drafted in a couple of lads to play bagpipes for the occasion to help tensions spill over. Perhaps that £1,000 had been put to good use?

Following on from the 11:00 kick off at Eyemouth United, we arrived at Home Park around an hour before kick-off. This little ground which belongs to one of Scotland’s oldest clubs is named in honour of former Prime Minister Alec Douglas-Home. He died in the town following his retirement from politics and he is buried in a churchyard here.

Entering through the gates into the ground felt very much like visiting your local park, without the fear of falling on to a used needle or cutting yourself on a Lambrini bottle. A colourful plant pot was positioned to the side, just next to the vast expanse of dry stone walling that acted as the perimeter fence. Daffodils rested themselves along the side of the stone, keeping well away from the trampling hordes of spectators.

Once in the ground, we were treated to views of the Cheviot Hills that formed an impressive backdrop for the match. We ventured into a packed clubhouse where people were already on their second helpings of neeps and tatties. Bear in mind, these same people had already been fed at the first match of the day at Eyemouth. It begs the question, where do they manage to keep it all?

Having finished their bottles of beer, the two lads with the bagpipes started belting out their instruments again which signaled the match was about to start. Out of a narrow doorway came the two sides; Coldstream in blue and visitors Tynecastle in ‘Jambo’ maroon.

Some opted to squeeze into the small modular stand that had been plonked at an angle in between the changing rooms and the corner flag. Most opted to line the railings that ran the length of the pitch as they witnessed Tynecastle secure the three points.

They opened the scoring on 14 minutes through Ryan Mayer and doubled their advantage just five minutes later through Dean Crabbe. The scoreline remained 2-0, with Coldstream finishing the match with 10 men after receiving a number of injuries.

While the town didn’t offer much in the way of things to do, it was a nice chilled out afternoon at Home Park. The Streamers are a mainstay in the East of Scotland League, where they were the inaugural winners in 1924. They have remained at that level ever since without repeating that triumph; they’re not a club necessarily driven by success. In reality they are up against clubs who have access to bigger pools of local talent and more resources. As long as they stop all that swearing, they should be just fine.

Back to the car we went. Next stop was the town of Hawick for our final match of this Scottish triple header. 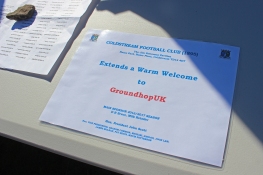 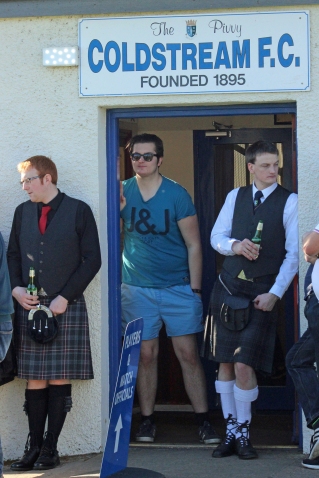 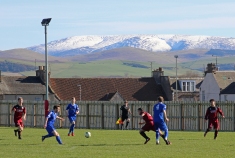 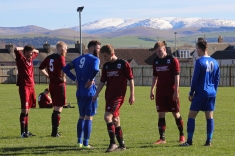 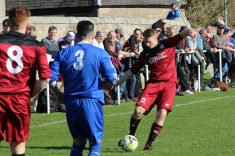 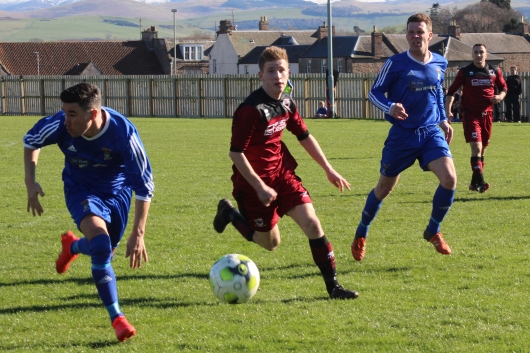