FC United are a team I have been wanting to visit for a few years now. However, whenever I have tried to watch them I have either been dragged to another match, or the weather has ruined plans. Recently I planned to go to the home match against Blyth Spartans, but the snow and ice meant the poor pitch at Gigg Lane stood no chance.

With the end of the season fast approaching and the sun shining I decided to make it a priority to visit Gigg Lane.

Having put on Twitter and Facebook my intentions to go to FC United, it shocked me how little people knew of the club. In short, when Malcolm Glazer bought into Manchester United in 2005, a group of fans (who were already unhappy) voted to start their own club. Run by the fans, for the fans. That ethos has seen them gain three promotions since their formation. During that time, Atherton Collieries beat them 3-0 at home with a hat trick from now Norwich City striker – Anthony Pilkington.

Unfortunately I wasn’t aware of non-league back when we beat them, so I had to make do with the visit of Frickley Athletic. Setting off from a sunny Atherton at 12:00, Lucy and I caught the 582 up to Bolton bus station. From there we had a pit stop in Bolton town centre, with a customary visit to Greenhalghs in Crompton Place. Lucy wasn’t too fond of the strange people who were knocking about in Bolton, so we rushed back to the state of the art bus station to catch the 524 to Bury (via Radcliffe).

We got off the bus at the bottom of Gigg Lane and walked up the quiet road towards the ground. With an hour until kick off, the surrounding area was still pretty quiet. The odd FC fan walked past us, caped in their proud red strip. Walking through the gates to the ground, it’s almost as if FC United are holding their own little car boot sale.

A host of temporary huts and stalls set up at the rear of transit vans made up the FC United part of Gigg Lane. The car park was painted red. Scarves hung from rails, providing a constant reminder of cup triumphs. China mugs rattled in the soft spring breeze… and the home shirts which hadn’t seen a reduction in price since production were lined up on a wallpaper pasting table. Found in front of the Main Stand was a small FC United sweet shop which sold everything from cough sweets to mint humbugs.

It was difficult to find an FC United sign to have a photograph in front of. Fortunately I found one balanced behind a drain pipe which was partially obscured from view by a Bury FC van. It’s a long way from Stafford Rangers who have invited Northwich Victoria to plaster Marston Road in Vics signs!

In the lead up to the match I asked many FC fans which stand was better for atmosphere. I really wish I hadn’t bothered. Little did I know I’d open a light hearted can of worms! The two options were the Main Stand or the Manchester Road End (MRE). I decided to go in the MRE as it is used as the away end for Bury home matches, meaning I’ve never had the opportunity to sit there.

Walking up to the turnstiles, I looked everywhere for a matchday programme. It soon became apparent that there wouldn’t be one. The printers had printed the correct date on the programme, but the content from the previous issue. I had been told they would be sold on Tuesday night – but I certainly wasn’t going back! I’ll just have to hope e-Bay is kind to me. Otherwise I’ll be without my first programme since 2002!

After that huge disappointment, we approached the turnstiles of the MRE. As Lucy made her way into the entrance, a quite moody and obnoxious steward stepped in my way and pointed me to the adult turnstile. I was quite shocked… and I had no ID! A quick rummage around, and I found my college pass with my date of birth. She only looked at the part which said “1995”… which by my calculations means I could be 18? So… If you’re going to FC United, just shout any year at the stewards. I’m sure they’ll let you in. 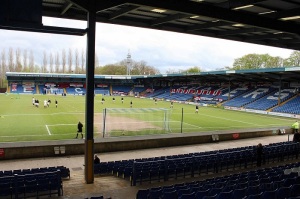 The MRE is the strangest stand at Gigg Lane. The first 5 rows are well below the pitch itself, so you have to look up at the play. Imagine being at the cinema on the front row with neck ache and you’ll get the idea. The stand has quite a gentle gradient with supporting pillars, meaning the view isn’t always the best.

The only other stand open was the Main Stand, which was to our left.

The rest of the ground was covered in an array of FC United flags. The focal point was a large FC United scarf which stretched half the way across The Les Hart Stand which was to our right.

Unfortunately for us, the match didn’t really have much riding on it. FC had already secured a play-off place. All that was left now was to determine where they would finish. The club had their sights set on third place, meaning a home semi-final against Witton Albion would be played on the following Tuesday.

Manager Karl Marginson had rotated his squad slightly with the play off matches in mind.

FC started off really well and looked relaxed with an important semi-final coming up. Matthew Walwyn pulled a shot just wide and Greg Daniels was pulled down in the area – no penalty awarded. 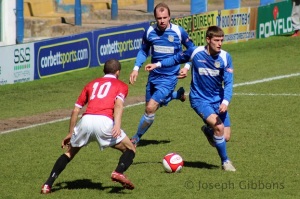 Frickley then went down the other end and should have opened the scoring. Jimmy Gaichem found himself one-on-one with Jon Worsnop. Gaichem spent too long on the ball which allowed Lewis Lacey to put in a superb challenge.

On 10 minutes the home side scored. Astley Mulholland was picked out by a goal kick. He brought the ball down well and moved forward with pace. Greg Daniels then received the ball. He in turn found Tom Greaves a couple of metres from goal, and he smashed the ball into the back of the net. It was a swift move, which deserved a goal at the end.

Greaves should have doubled his tally for the afternoon midway through the half. Walwyn fired a ball in from the right which found the striker in plenty of space inside the Frickley area. Greaves had plenty of time to compose himself before sending a ferocious shot towards goal. His effort crashed against the bar and left it shaking.

The most entertaining part of the afternoon was when Jerome Wright knocked the referee over in full view of the FC faithful. Matthew Tierney played a through ball to Wright who was obstructed by the referee. The small referee stood no chance and ended up sliding across the turf. The FC United fans then began to sing “Are you Suarez in disguise? Are you Suarez in disguise?”

On 39 minutes Walwyn scored what was possibly my favourite goal of the season. Wright made a run down the left and headed the ball to Mulholland. Mulholland then flicked the ball to Walwyn who scored a sublime goal. He flicked the ball up with his left foot, before then controlling with his left knee. Still moving forward, his next touch was to volley the ball into the top right hand corner from the edge of the box. Lucy laughed at me when I stood there and simply went “Wow”.

Half time arrived and it was time for us to have a walk around. The sunshine was beaming down so we went outside into the car park for a while. The members of the Main Stand took their blankets off, and began to drink out of their collection of flasks.

The second half began and Frickley should have pulled a goal back in the opening exchanges. Substitute Gavin Allott went one-on-one with the United keeper who had come off his line. Worsnop somehow made the block when it looked odds on that Frickley would score.

71 minutes and FC United put the match beyond doubt. Michael Norton met Tierney’s cross from the right and headed home in front of the MRE.

Frickley offered little in the way of attack throughout the match. They had nothing to lose, and it would have been nice to see them compete a bit more from a neutral perspective. Despite this, I still thoroughly enjoyed the match.

After the match it was time to get the bus home. We only had to wait about 30 seconds for the 524 to Bolton before we then caught the 582 back home to Atherton. We spent the evening at Atherton Collieries who had a BBQ and Bouncy Castle on the pitch. Honestly, it was my highlight of the season.

Overall, I really enjoyed my day out. The FC fans didn’t disappoint. They are a different class. I did find it amusing that members of the MRE constantly abused those stood in the Main Stand. I have been told it’s all a big laugh at the end of the day. 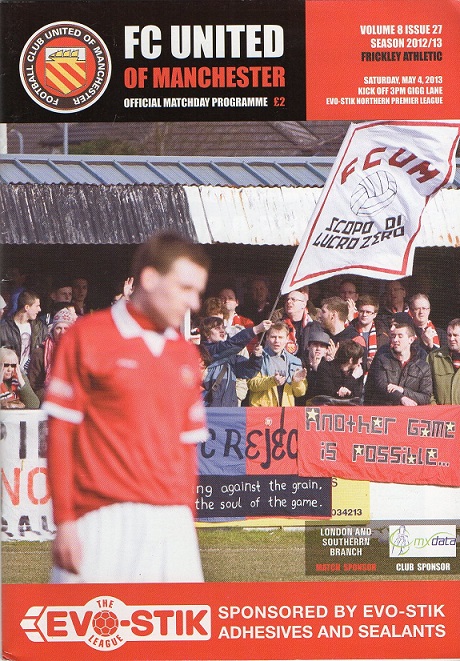