We hadn’t travelled a lot during this pre-season; not enough for my liking anyway. Notable day trips to Anglesey and Blackpool last pre-season left me wanting to visit more places that I wouldn’t usually even bat an eyelid at. Granted, I had been to Whitley Bay on the Saturday but I wanted a full day somewhere.

Joe suggested that we could go jogging around Ashton before then heading off somewhere to watch some non-league pre-season football. However, this plan was soon scuppered when I reminded him that I had gone over on my ankle whilst we played football at York University a few weeks ago. In fact, I had done little exercise since my heavy fall, so I suggested that we should go for a walk as it may be more beneficial for my ageing teenage body.

Half expecting Joe to laugh at my idea of a day out and label me as “boring” I was surprised when he responded by pulling out a battered handbook. It was entitled “The AA’s Pub Walks & Cycle Paths”. It turned out to be one of his Dad’s retirement presents and it more than did the job for us. We found a circuit around the valley which neighboured New Mills, co-incidentally where Joe’s side Curzon Ashton would be playing in the evening. 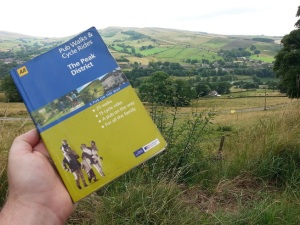 The day started off by me jumping out of the shower upon hearing the doorbell go. Clambering around in the steam, I wrapped a floral towel around myself and opened the front door. Fortunately it was Joe, and not the Avon lady or a Jehovah Witness. I quickly got changed and grabbed necessities for the day – by necessities I mean an auxiliary cable which would enable us to play our own songs in the car.

Our destination was Hayfield, a small little village which sits at the foot of Kinder Scout. The location of the 1932 mass trespass, which marked the beginning of a campaign which culminated in the Countryside and Rights of Way Act being passed in 2000. The mass trespass saw Ewan MacColl write the song “The Manchester Rambler” (http://www.youtube.com/watch?v=YENYMwuCG2Y) which my Mum informs me was one of my Grandad’s favourites. 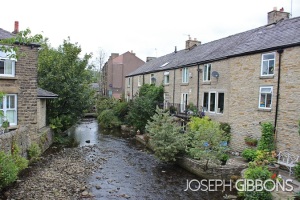 Hayfield was a peculiar place which seemed cut off from modern day life, despite having a main road running through it. There were corner shops that were decorated with rabbits and pheasants which were hanging by their legs, whilst the sounds of sheep and cattle fill the air. I hadn’t been hiking for years, so I ended up borrowing my Dad’s boots and rucksack. I didn’t need to borrow them, but I wanted to look the part.

In all, the walk saw us take in seven miles of hill walking with the highest point being the peak of Lantern Pike which sits next to Kinder Scout. It was a successful afternoon on a personal level, as I managed to walk through a cow field despite having a life debilitating phobia of cattle. I’ll be honest, I nearly ended up walking back on myself to avoid walking through the cows, but after Joe walked through them I felt sure they wouldn’t trample me.

Descending through the final bit of our journey the heavens opened, just as Aaron sent us a photograph from his holiday in Portugal. We didn’t care though. We were having more fun and we even passed a blue plaque, which stood on a house where actor Arthur Lowe (Captain Mainwairing from Dad’s Army) was born and raised.

A quick dry off with a towel in the car and we were ready to have a much needed pub lunch in The Sportsman pub. A steak and ale pie (which I refused to class as a pie as it just had a pastry lid) and a Warsteiner beer (famous from my blog on Hertha Berlin) was a bit expensive, but we didn’t care. We needed food quickly as kick off time was fast approaching. 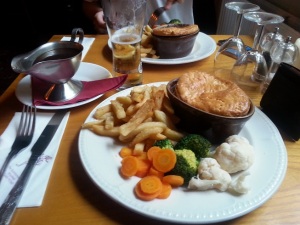 The food was more than filling and we were soon back in the car heading to the neighbouring town of New Mills. The town was given it’s name – unsurprisingly – after a corn mill which opened in 1391. A booming mining industry, followed by a cotton weaving era saw many more mills built in the area. As the industries declined, many of these mills closed. However, one notable one is still in operation after it was bought by sweets manufacturer Swizzels Matlow during the Blitz. The company famous for ‘Love Hearts’, ‘Parma Violets’, ‘Refreshers’ and ‘Drumsticks’ has resided in New Mills ever since and is one of the local areas biggest employers.

I’ve often looked at going to Church Lane, home of New Mills but have always opted to go elsewhere. Asking around for opinions on New Mills you’re likely to hear people criticise the gradient of the pitch. I arrived, expecting to see some monstrosity that would be fit for skiing on in the winter months, but there wasn’t much wrong with it at all. The only slight problem with the pitch was that a local school sports day had been held on it in recent weeks, and the running lanes were still imprinted on the flanks. A bit of an eye sore, but I felt this added to the excitement of the match. It appeared like the wingers were racing against each other in an egg and spoon race at times.

Football has been played in New Mills since 1886 when the club first started playing friendly matches before joining the North Cheshire League before moving on to the Manchester League. Back then, the club was named New Mills St George’s, after the large church which stands opposite the ground. The club moved into their current home in 1922.

Financial problems saw the club pull out of competitions in 1983, but Church Lane wasn’t left vacant for long with local side Birch Vale and Thornsett FC in need of facilities. Now using Church Lane as their ground, the new tenants took over the running of New Mills FC and renamed themselves to reflect this.

The club currently compete in the Evo-Stik Division One North having won promotion from the NWCFL Premier Division back in 2011. Finishing in 16th place last season the club seemed to have brought in a number of new players over the summer and more than held their own against a Curzon Ashton side who are preparing for their first campaign in the Evo-Stik Premier having won promotion last season.

A handful of Curzon fans had made the relatively short journey over from Tameside, opting to scatter themselves around the ground all hoping to find a phone signal so they could contact the world with match updates. I suggested that standing underneath the metal roof of the main stand may be beneficial but that didn’t work either, leading me to draw the conclusion that the internet still hasn’t been introduced to the Borough of High Peak. Other than the main stand, the rest of the ground comprised of a clubhouse end which had various picnic tables and a side which is inaccessible due to an all weather pitch backing on to the dugouts.

New Mills came into the match on the back of a 15-1 weekend win against Welsh National League side Brymbo FC, but they appeared to have ran out of goalscoring ideas against a Curzon Ashton side who defended well in large parts of the match.

The first chance of the match fell to New Mills, when one of their strikers picked the ball up on the edge of the box and hit a fierce shot on the half volley. Goalkeeper Hakan Burton was equal to it, getting down well to his left to parry the ball away.

Curzon responded with some good possession play but didn’t threaten until the 16th minute. Defender Simon Woodford carried the ball down the wing and launched a deep cross into striker Ryan Brooke who was unable to direct his header towards goal.

On the 23 minute mark, New Mills claimed for a penalty when an attack came down the left hand side. Racing into the area the ball was smacked against the arm of a Curzon defender from a matter of inches. Never in a million years was it a penalty. I was stood about half a metre from the incident, taking the role of the official who stands behind the goal with a baton.

Still moaning about the referee’s decision, play continued and Curzon broke. The ball made it’s way up field to Sam Walker who threaded through Jimmy McCartney. Through on goal, the striker was hauled over and a penalty was awarded to The Nash. Matty Kay stepped up and slotted the ball past Peter Collinge.

Eight minutes later and Ryan Brooke got his name on the score sheet when he fired an unstoppable shot into the net after receiving the ball from a throw in.

People often moan about the number of substitutes made during pre-season matches, saying it halts the momentum of the game and ultimately the play becomes tedious to watch. With five minutes to go until half time, the New Mills management team decided it would be suitable to make seven changes. Yes, seven. It was possibly the most ludicrous thing I have seen in any pre-season match.

Curzon opted to make their changes at half time, with Hakan Burton making way for Tom Hunt and striker Niall Cummins also being introduced. Niall – of course – was the striker who made our trip back from Harrogate so enjoyable last season when he scored the goal that saw Curzon gain promotion.

New Mills had their best creative chance of the match two minutes into the second half, but the striker could only help the ball into the goalkeepers hands after a great cross from the left.

Ryan Brooke went close to doubling Curzon’s lead on 60 minutes, but his lobbed effort fell just wide of the left hand post. Minutes later, the home side were awarded a penalty after poor back pass led to goalkeeper Tom Hunt bringing down the advancing New Mills striker. In a competitive match Hunt would have been sent off, but he got away with a simple wag of the finger from the referee.

The resulting penalty went straight down the middle, and Hunt was able to clear the ball away with an outstretched leg. From then on, Curzon took complete control of the match and rounded off the scoring with eight minutes to go when Luke Mack curled the ball into the top corner from around 25 yards out.

The referees final whistle resulted in Curzon Ashton picking up their first victory of pre-season, while New Mills can look at the positives from a match in which they played some nice football, just lacking the final product. It was becoming a little chilly towards the end of the evening, with open skies and rolling hills surrounding us so we nipped in the clubhouse for a while until we set off home.

Overall, I liked New Mills. There didn’t look to be much to do around the town, but the scenery and ground are well worth the visit. The people who run the club were all really nice and friendly, which means I will definitely be making another visit to Church Lane at some stage in the future. They even produced a small programme for this match, which was impressive given the small crowd. 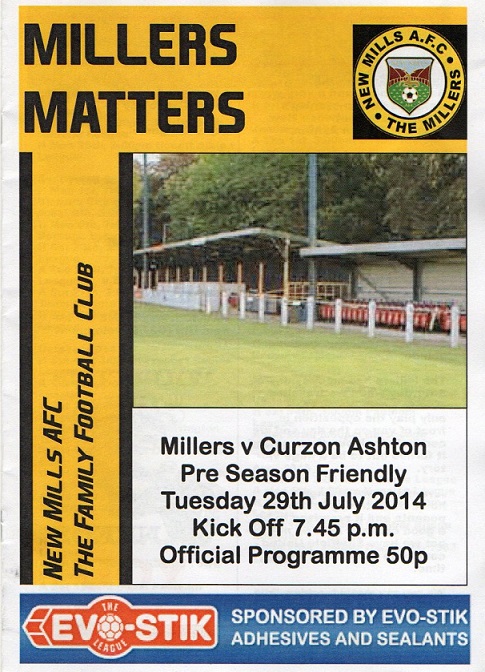