The previous night, at Golcar United, we had stared in bewilderment at a pitch which was quite possibly the worst a game of football had ever played on. I didn’t mind at all though as an entertaining battle was played out against Nelson. Fast forward 24 hours and conditions were a complete contrast on a perfectly flat 3G surface over in St Helens. Pilkington were hosting National League North side Southport in the Liverpool Senior Cup.

While the pitch wouldn’t be causing any issues, the weather could. And for once, it wasn’t the rain.  A freezing winter fog – which lingered more intensely than a pickpocket down a Barcelona backstreet – threatened, throughout to interrupt the match.

Another option for this Wednesday night was Longridge Town, a club not exactly popular amongst the famously unforgiving groundhopping fraternity. A couple of weeks beforehand, I arrived just as their match was postponed. There was little in the way of an apology or any sense that they were even bothered. In fact, the only conversation I managed to have with anybody that evening was when I was shouted at by a Longridge volunteer for standing in front of the TV. They didn’t appear to care one bit about visitors.

With the option, I decided to take my money elsewhere. Pilkington were labelling their match against Southport as the biggest in their history. After years of playing in the Cheshire League, this was arguably correct. They were refreshing in their approach of getting people through the gates, hammering social media for days and literally begging anybody to come along. I admired their hard work and took them up on their special matchday offer. For £10 you could get admission, a pie and a pint, a programme and a seat if you really wanted one.

Pilkington have played at Ruskin Drive since 1948 but the place was subject to an extensive rebuilding process in 2016. The local council bought the site from the club and turned it into a huge community development, catering for a variety of sports and different clubs. Not only did Pilkington – the original tenants – benefit from the improved facilities, allowing them to step up into the NWCFL but the nomadic St Helens Town were able to join them, bringing them back to the town.

I had been to Ruskin Drive a couple of times already, to watch St Helens play. It’s not the most inspiring of places but it provides both Pilkington and St Helens Town a functioning home, which is the main thing. Pulling up in the packed car park, we made our way over the small, brick-built bridge which hops over Windle Brook. Inside the Sticky Wicket we headed to pick up our tickets.

The Sticky Wicket is the former pavilion of the cricket club but was refurbished at a cost of £250,000. Now, a smart restaurant and bar are housed in the historic building. A few visiting Southport fans were enjoying a few pints, finding their surroundings very different to what they are normally used to higher up the pyramid. The last time I had seen the Sandgrounders had been a league match away at Lincoln City.

Behind the bar were a number of white envelopes, each with the names of those who had pre-booked the matchday offer via Twitter. Adam and I handed over our cash and started to split the paper tokens which emptied like confetti on to the counter. We found a quiet corner by the window and waited until just before kick-off to make our way over to the football ground.

The draw for the quarter-finals had in fact seen Southport pulled out of the hat first. With the operating costs of staging the match at Haig Avenue far outweighing potential earnings, the decision was made to switch the tie.

This proved to be a smart idea. It turned out to be Pilkington’s all time record crowd, with 261 turning up. A sizable queue had formed by the time we entered.  At danger of becoming overwhelmed, the two volunteers in the small white cabin were working overtime, ushering everybody through as the sides made their way through the thick fog and on to the pitch.

Only in their first season at this level, Pilkington had adapted well to life in the NWCFL First Division North, sitting in sixth place coming into this match. Four divisions higher, full-time Southport were without a win in six but were sitting comfortably in the middle of the National League North table.

The visitors opted to rest some of their more senior players, hoping that a youthful front line would help take them through to the semi-finals. The man who stole the show with a hat-trick for Southport was a young Connor Woods who had actually started out at St Helens Town.

Despite being backed by quite a lively home following, including a group of young lads who sang songs throughout with the backing of a drum, Pilkington found themselves on the receiving end of a 4-1 scoreline. They were a goal behind after 27 minutes when Woods finished smartly. He struck again a few minutes later to make it 2-0 to Southport.

Before the interval, Adam headed to the refreshments cabin to claim our pies and we met back over in the Sticky Wicket to regain some sense of warmth. I bumped into longstanding St Helens Town secretary Jeff Voller, who hadn’t caught the first half as he had been playing football on the neighbouring rugby pitch.

From inside the bar, we had no way of knowing when the match restarted, so hoped that by refreshing Twitter we would be notified of kick-off. It didn’t go to plan. By the time a tip off arrived, Pilkington had reduced the deficit. Callum Laird with the goal that we and many others had missed.

Now with extra impetus they took the game to Southport and were rewarded with a penalty. Laird was fouled in the box and took responsibility for the spot kick. He brushed the collection of black rubber particles off his green kit but in front of a sizable congregation behind the goal saw his effort well saved by Charlie Albinson.

Momentum then swung instantaneously back to Southport who broke on the attack and Woods was able to complete his hat trick. The final goal of the game arrived when former Bolton Wanderers striker George Newell rose at the far post to head home to make it 4-1.

Southport’s players congratulated each other as they booked themselves a place in the semi-finals against Tranmere Rovers. Pilkington, while being disappointed not to claim a huge scalp were proud of how they coped, not just on the pitch but off it too.

Pilkington were in eighth place when the 2019/20 season was stopped due to the outbreak of coronavirus. The semi-final between Southport and Tranmere didn’t take place. 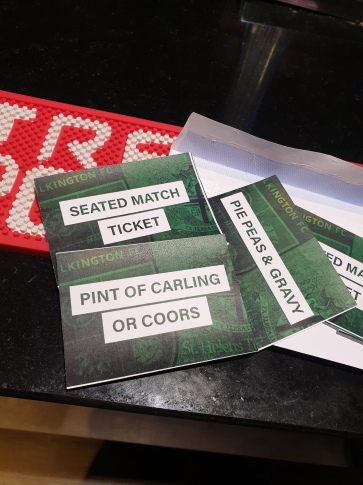 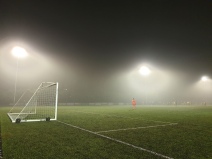 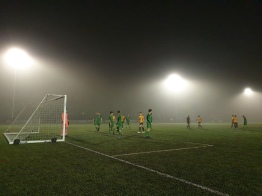 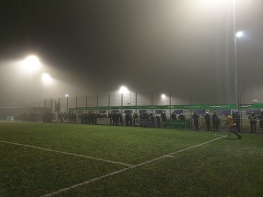 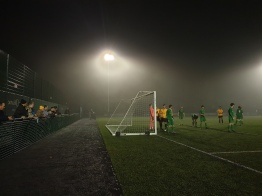